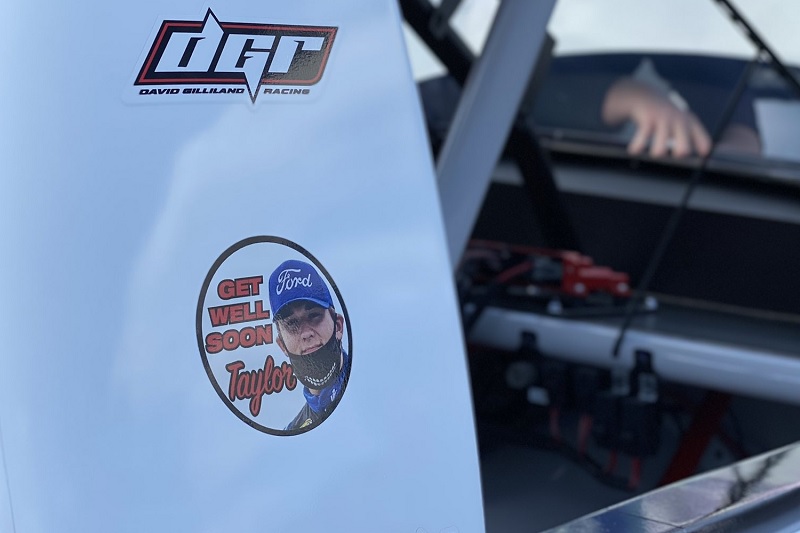 After spending the last thirteen weeks recovering from injuries sustained in a car accident, Taylor Gray is set to return to the driver’s seat. On Tuesday, David Gilliland Racing confirmed Gray will run the upcoming ARCA Menards Series race at Elko Speedway before following the “schedule through Watkins Glen (International), where he intends to do double duty with ARCA and the NASCAR Camping World Truck Series.”

The younger brother of DGR Truck driver Tanner Gray, he was supposed to make his series début at Richmond in April prior to the accident. The single-car crash resulted in fractures to his L4 vertebra, ankle, and left foot in the days leading up to the race, forcing him to abort the start and the team to withdraw his #17 truck.

Gray’s ARCA schedule was also thrown into disarray, with his last start in the national series being a ninth at Phoenix in March. He also has a pair of top fives in as many starts in the ARCA East Series.

Now recovered, he will run a “stretch of five straight weeks of racing” beginning with the Elko round on Saturday as he enters the next four ARCA events at Berlin Raceway, Iowa Speedway, Winchester Speedway, and Watkins Glen. Gray has no major experience at The Glen.

On social media, Gray announced his return by quoting lyrics to Eminem’s “Without Me” with a photo attached of him working out: “Guess who’s back, back again…”

DGR’s #17 is currently twenty-sixth in owner points. Since Gray’s injury, the truck has been piloted by Kevin Harvick and Ryan Preece, the latter of whom won at Nashville in June, while Donny Schatz is scheduled for his CWTS début in it at Knoxville on Friday.

By Justin Nguyen
2 Mins read
In a unique form of Double Duty, Max Gutiérrez will run the NASCAR Truck Series at Nashville on Friday before crossing the border to race in the NASCAR Mexico Series at Cajititlán on Sunday.