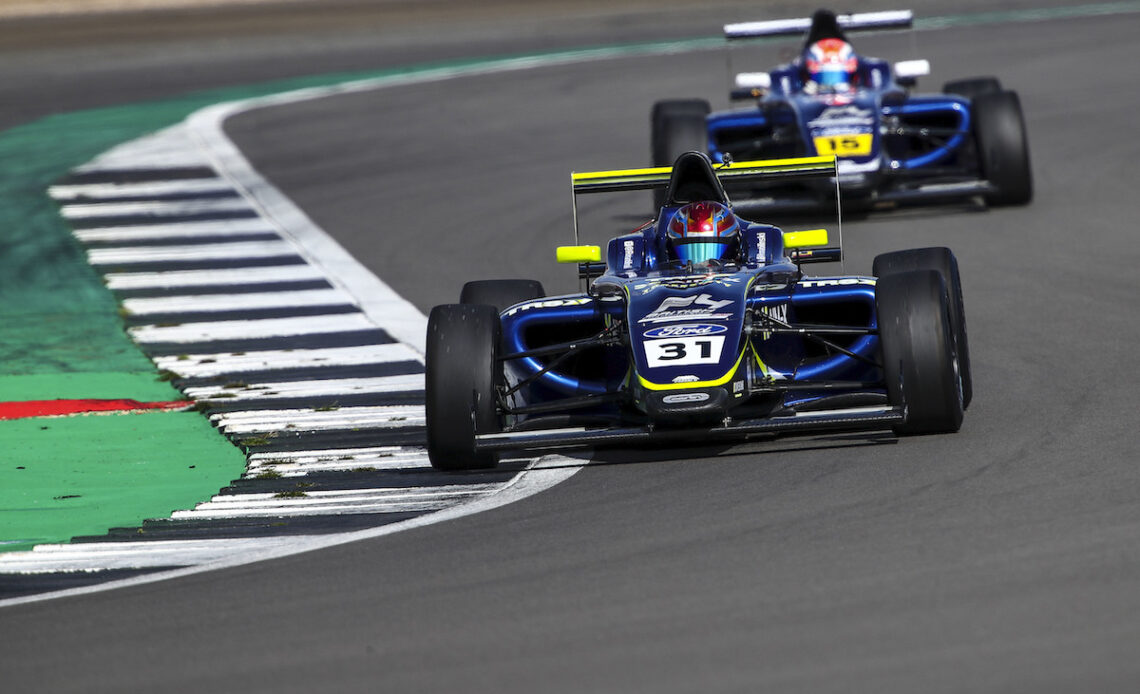 Roman Bilinski will take no further part in the 2021 FIA F4 British Championship, instead focusing on finishing strongly in the GB3 Championship, Carlin has announced.

He has been one of the shining lights of the newly-rebranded GB3 Championship since his debut in July, taking five podiums and two wins to date.

The Polish driver replaced Frederick Lubin at Donington Park and Circuit de Spa-Francorchamps, rejoining the Arden Motorsport outfit he competed with in British F4 in 2020.

For several rounds, he split his time between GB3 with Arden and his sophomore F4 campaign with Carlin, taking top-five finishes in each of his first nine races at the higher level.

His impressive start in the championship, despite having missed testing and the first two rounds of the season, has thus far yielded wins in Race 1 at Spa and Race 3 at Snetterton 300.

Bilinski finished eighth in the British F4 standings last season, but was 13th at the time Carlin announced his departure from the team.

Granted, he had begun to prioritise GB3 rounds where clashes occurred, but it seems he has gelled much more with the Tatuus BF3-020 than the Mygale British F4 car, both of which will be revamped in the coming seasons.

Should the 17-year-old continue in GB3 into next season, he will be racing the new Tatuus MSV-022, which features improved aero, increased horsepower, a halo and air intake reminiscent of more traditional F3 machinery.

Incidentally, the top two in the GB3 standings are currently being run out of Carlin’s stables, though Bilinski did not rule out another partnership with the Farnham squad in the future.

“I’d like to thank the guys in the Carlin British F4 team for being so great this year,” he said.

“We had a great time together and although it didn’t turn into the season we hoped for, it was a hugely-enjoyable experience working with all the guys.

“Big thanks also to Trevor [Carlin] for working with us on the second half of the season. I’m sure we will have the chance to race together again in the future.”

Carlin added, “We appreciate that Roman and his sponsors’ focus has changed this season, with a desire now to focus on the GB3 Championship for the remainder of the year.

“Sometimes a campaign doesn’t quite go according to plan, but together we have worked out a mutually-agreeable plan to move forwards.

“We wish Roman lots of luck in the remaining GB3 Championship races and hope we have a chance to work together in the future.”

Browning: "Pole where we should be" as he takes GB3 lead

By Michael Callander
1 Mins read
Callum Voisin took his second GB3 win at Snetterton on Saturday, as the Championship lead swapped hands behind him.
GB3

By Michael Callander
2 Mins read
Callum Voisin will start the first GB3 race of the weekend from pole at Snetterton. Luke Browning and Mikkel Grundtvig took pole for Races 2 and 3 respectively.