Lando Norris: “We’ve had a great start to the season in the first half of the year” 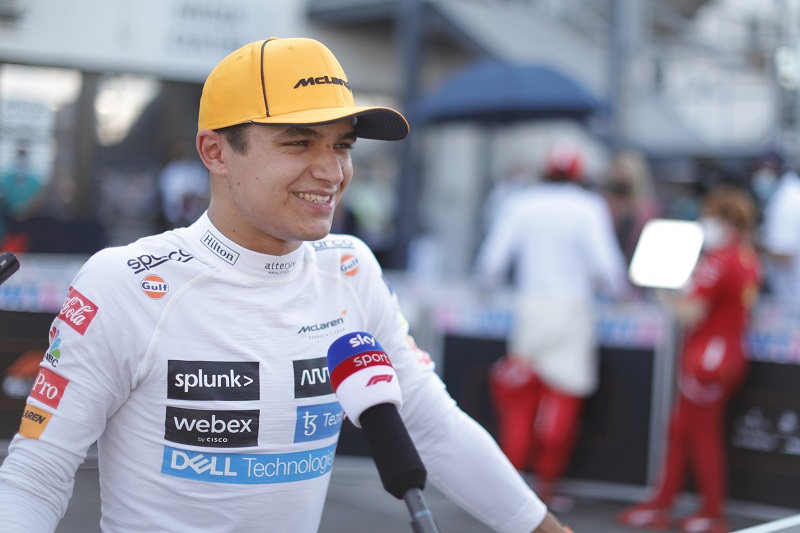 Lando Norris saw his points-scoring run end on the opening lap of the Hungarian Grand Prix, with the Briton getting caught up in the accident instigated by Valtteri Bottas heading into turn one.

Up until the race at the Hungaroring, the McLaren F1 Team racer had scored points in all ten races of the season, and fifteen races in total.  It was the longest run of points scores by a McLaren driver in the teams’ history.

Norris is looking to bounce back this weekend at Spa-Francorchamps, one of the Briton’s favourite venues on the calendar, and he is excited to resume racing after conclusion of the summer break.

“I can’t wait to head back to Spa to get the season back underway,” said Norris.  “After a bit of a break to unwind and prepare for the second half of the year, I’m looking forward to getting back into the car.

“The Belgian GP is a special race. Firstly, it’s one of my favourite circuits on the calendar with a really flowing and high-speed layout. The Radillon and Eau Rouge sequence is one of the most exciting on the entire calendar, and it’s really cool to take these corners flat out in a modern F1 car.

“Secondly, it’s home for a lot of my family, which always makes racing there a special occasion. I definitely feel the love from the fans out there too, so I’m looking forward to getting out on track and giving them a good show.

“We’ve had a great start to the season in the first half of the year, so now the focus is on picking that back up and carrying that through until the end of the season.”

200 Not Out for Daniel Ricciardo

Team-mate Daniel Ricciardo will compete in his two-hundredth Grand Prix this weekend at Spa-Francorchamps, with the Australian looking to kickstart his season after a mediocre – at best – opening eleven races.

Ricciardo made his debut with the HRT F1 Team back in the British Grand Prix of 2011, and since then, through spells with Scuderia Toro Rosso, Red Bull Racing and the Renault F1 Team, he has racked up seven wins, thirty-one podiums, three pole positions and fifteen fastest laps.

He has yet to pick up a podium finish since joining McLaren at the beginning of 2021, but he is looking to make his two-hundredth race start a memorable one by scoring big points in Belgium.

“After a few weeks away from Formula 1, I’m looking forward to going racing again at Spa, which is an awesome circuit,” said Ricciardo.  “It’s the perfect track to come back to with its high-speed sections and dramatic elevation changes.

“I’ve been back to work in the simulator at the factory this week in preparation for the weekend and I’m ready to get back at it.

“This is also a special weekend for me as I prepare to line-up for my 200th Grand Prix. If you’d have told me back at Silverstone in 2011, when I made my debut, that I’d hit 200 Grands Prix, I’d certainly have been very excited about it.

“It’s really a cool milestone to hit and definitely one that I’m proud of. I’ll be doing everything I can to make it a weekend to remember.“

"There was no time to experiment" - Fernando Alonso

By Nick Golding
2 Mins read
Fernando Alonso qualified sixth with Esteban Ocon tenth at the Russian Grand Prix, as Alpine get both cars into final qualifying for the fifth time this season.
Formula 1

"Not what you expect from a champion" - Lewis Hamilton

By Nick Golding
2 Mins read
Hamilton and Bottas to start fourth and seventh after throwing away front row lock-out at the Russian Grand prix after late tyre switch. Hamilton’s pole hopes were ended after hitting the barrier on pit-lane entry in crazy qualifying.
Formula 1

"We're riding a wave at the moment" - George Russell

By Nick Golding
2 Mins read
Mr Saturday George Russell did it yet again! The British driver qualified in third place for the Russian Grand Prix in dramatic mixed conditions qualifying.