Valtteri Bottas: “The pace on both the short and the long runs was pretty decent” 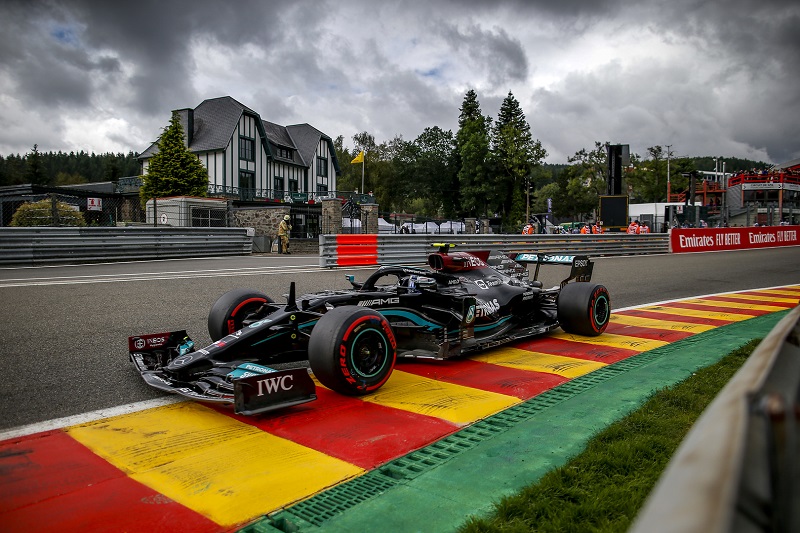 Valtteri Bottas was happy with how his Friday sessions went at Spa-Francorchamps, with the Finn ending inside the top two in both the morning and afternoon.

Bottas ended fastest in the morning session at Spa-Francorchamps, but fell to second in the afternoon session, although he was only 0.041 seconds away from pacesetter Max Verstappen.

The Mercedes-AMG Petronas Formula One Team driver goes into this weekend knowing he will drop five places on the grid after the penalty from the Hungarian Grand Prix is applied, and as a result, the Finn was trying to work out the best set-up so he can overtake on Sunday afternoon.

Bottas feels it will be important to be fast in a straight line so he was experimenting with a lower downforce set-up, but he knows that set-up will not work if its wet.

“Everything felt pretty good out there today,” said Bottas.  “As we saw from the timesheets, it’s going to be very close with Red Bull once again so we’ll look into the detail tonight and see what marginal gains we can find.

“The pace on both the short and the long runs was pretty decent. It’s always tricky to compare in detail from the practice sessions, but at least the feeling is good, so that is a positive start to the weekend.

“We looked quite fast on the straights with the wing level we ran and in the race, it’ll be important for me to be quick in sectors one and three, to make the overtakes. But then, if it rains, you want more downforce.

“So, session by session, we need to see how it is going to look. That decision will be key for Qualifying.”

Team-mate Lewis Hamilton says finding the right balance around Spa-Francorchamps is a big challenge, and he ran with two different set-ups across the day on Friday in a bid to find the right one for the rest of the weekend.

The reigning World Champion was only eighteenth fastest in the morning session after failing to set a representative quick lap after being caught out by Nicholas Latifi’s Williams Racing machine at the Bus Stop Chicane, but the afternoon saw him finish third, although under a tenth of a second down on Red Bull Racing’s Verstappen.

Hamilton felt the two set-ups gave him pace in different places, with the lower downforce set-up improving his pace in the first and third sectors, while the higher downforce set-up saw him faster in the middle sector.  And the seven-time champion knows it will be important to find a compromise so the pace is there across the whole of the lap.

“Finding the right balance here is a big challenge,” said Hamilton.  “In FP1, we tried one way, and then we changed it this afternoon.

“The pace was quite similar – you try one option, and you are faster in the first and third sectors, but slower in the middle. And then you try the other option and it’s the opposite. So, figuring out the right balance is really tricky.

“It’s also tough to gain knowledge in these short sessions but we’re navigating it the best we can and at least it was dry for most of the running. Overall, it was an okay day, but I didn’t quite have the car underneath me, so we’ve got some work to do tonight to figure that out.

“The weather is also going to play a big role. If it does rain, you obviously want more downforce, but then if it doesn’t rain, you are a sitting duck on the straights. So we have to be very careful with the changes we make.”