Fernando Alonso: “I think third place is more of a true reflection of our finishing position” 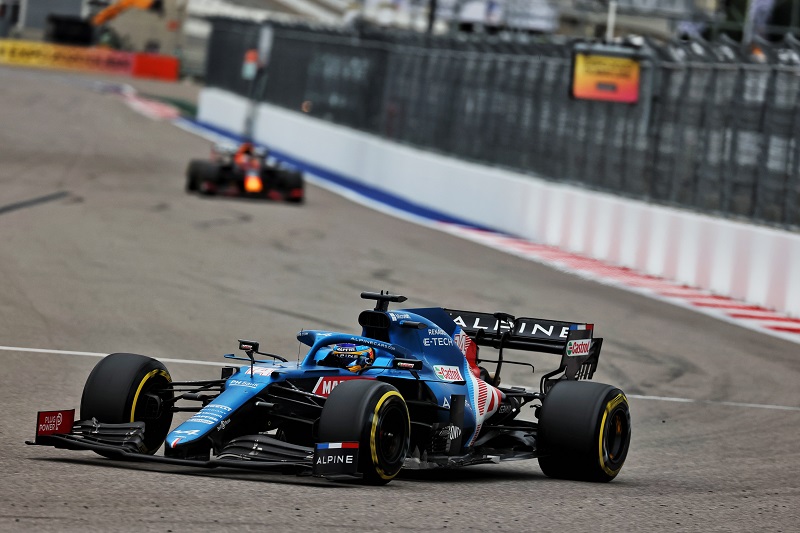 Fernando Alonso felt his performance during the Russian Grand Prix merited a podium, but the Spaniard was forced to settle for sixth after pitting a lap later than other drivers for intermediate tyres, a decision that gave his rivals the advantage.

The Alpine F1 Team driver was battling Red Bull Racing’s Sergio Pérez for the final step on the podium when the rain began to fall in the closing stages at the Sochi Autodrom, and he headed to the pits with three laps remaining to switch to the intermediate compound.

However, the likes of Max Verstappen, Carlos Sainz Jr., Daniel Ricciardo and Valtteri Bottas all benefitted from pitting the lap before, with the time lost by Alonso in driving around the damp-to-wet track on slick tyres costing him the chance of a first Alpine podium finish.

“We finished sixth, but I think third place is more of a true reflection of our finishing position today,” reckoned Alonso.  “It all came down to luck in the end with the rain coming so late on.

“It was like a flip of a coin. Some cars stopped one lap earlier and I was in third position when it really started to rain. It was impossible to predict. Nevertheless, sixth is a good result for us and we deserved it.

“We looked competitive throughout the race, so there are lots of positives to take away.”

Team-mate Esteban Ocon took the same gamble, and like Alonso he lost out massively, with the Frenchman ending the day outside the points in fourteenth.

Whereas Alonso was in the battle for the podium, Ocon had been looking to break into the minor points-paying positions on Sunday, and the delay in pitting cost him that opportunity to score a top ten result.

Ocon admits the wrong decision was made to pit with three laps to go, and he will be looking to put the weekend in Russia behind him and to begin preparation for the Turkish Grand Prix in two weeks time.

“It was not a good race for us today and, in general, we haven’t had the pace all weekend,” said Ocon.  “It’s disappointing, of course, not to score points, especially when there was an opportunity at the end with the wet conditions.

“We didn’t make the right decision at the end and it was a risk to stay out on track on dry tyres. It’s one of those days we have to forget, and we’ll move on, analyse what happened, and come back stronger for the next race.”

By Nick Golding
1 Mins read
The Mclaren F1 Team saw Scuderia Ferrari close the gap to within a handful of points of them in the Constructors’ standings, after Ricciardo finished fifth and Norris in eighth at COTA.
Formula 1

"I had to defend pretty hard" - Daniel Ricciardo

"I believe we can fight for third place" - Ferrari's Mattia Binotto

By Nick Golding
1 Mins read
Scuderia Ferrari closed the gap down to just 3.5 points to the Mclaren F1 Team, as the fight for third continued to intensify at the American Grand Prix.