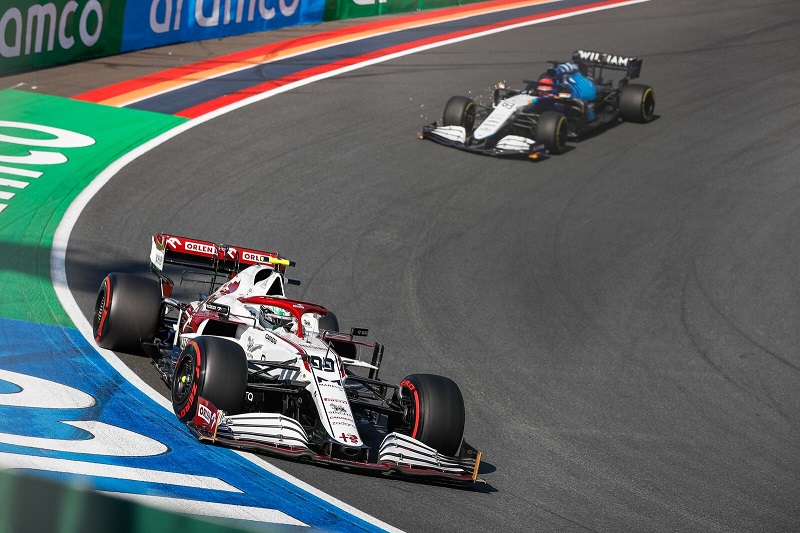 Xevi Pujolar, the Head of Trackside Engineering at Alfa Romeo Racing ORLEN, says the team will do everything they can to overhaul Williams Racing in the battle for eighth place in the Constructors’ Championship in 2021.

Alfa Romeo has seen Williams pull ahead thanks to four points scores in the past five races, with two of those being double points scores for George Russell and Nicholas Latifi.  Both drivers scored points in both the Hungarian and Belgian Grand Prix (although the latter was just for half points after the race was curtailed after just a handful of laps behind the safety car due to heavy rain), while Russell has also scored top ten finishes in both the Italian and Russian races.

Williams currently has twenty-three points to their name while Alfa Romeo have just the seven, although they secured their best result of the season in Russia thanks to Kimi Räikkönen taking an eighth-place finish. Prior to that, the team had only scored three points courtesy of tenth place finishes in the Monaco, Azerbaijan and Hungarian races.

And that result, coupled with some impressive Qualifying displays from Antonio Giovinazzi who started inside the top ten for both the Dutch and Italian Grand Prix, has given Alfa Romeo confidence they can fight back and retake that eighth place away from Williams in the remaining seven races of the season.

“We keep pushing,” Pujolar is quoted as saying by PlanetF1.com. “We do our best every race and we will fight until the end of the season and we will see after Abu Dhabi if we did it [beat Williams] or not.

“At the moment, we just try to get the best of everything every time. That is it, we focus on the best of ourselves.”

"I had to defend pretty hard" - Daniel Ricciardo

"I believe we can fight for third place" - Ferrari's Mattia Binotto

By Nick Golding
1 Mins read
Scuderia Ferrari closed the gap down to just 3.5 points to the Mclaren F1 Team, as the fight for third continued to intensify at the American Grand Prix.
Formula 1

"One of the most physical drives of my career" - Charles Leclerc

By Nick Golding
2 Mins read
Charles Leclerc converted his fourth place start into a fourth place finish at the American Grand Prix, with Carlos Sainz Jr behind in seventh after a race long battle with Daniel Ricciardo.