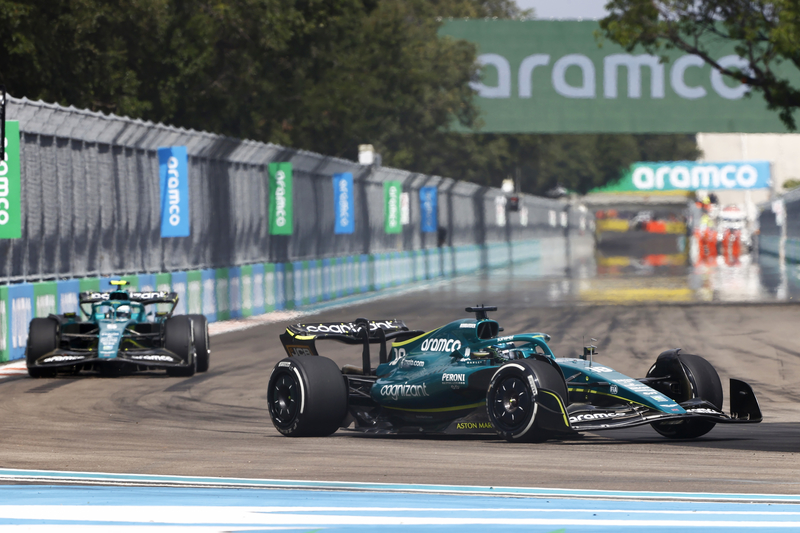 It was a mixed Miami Grand Prix for the Aston Martin Aramco Cognizant Formula One Team, after Lance Stroll recovered to finish tenth whilst team-mate Sebastian Vettel retired late-on at the Miami International Autodrome.

Stroll put in a strong performance in Miami, to take home a single-point despite having started from the pit-lane. The Canadian initially crossed the line in eleventh but was elevated to tenth following a late time penalty for Fernando Alonso.

Vettel was also on-track for a points finish, until he was suddenly forced into retirement after Mick Schumacher dived-up the inside of him at Turn 1, where the pair then collided.

Aston Martin Team Principal, Mike Krack blamed Schumacher for Vettel’s retirement when he spoke to the media before Alonso’s penalty was announced.

“Today was a frustrating day. First, we had a fuel temperature issue that delayed the release of our cars from the garage, resulting in both our drivers starting the race from the pit lane. They made good progress on Hard tyres early on, and we were able to bring them in for Mediums during the Safety Car deployment triggered by [Lando] Norris’s lap-41 shunt. Sebastian was then running in 11th  place on new Mediums, just behind [Esteban] Ocon on older Softs and [Mick] Schumacher on older Hards.

“On his fresh Mediums, Sebastian duly leveraged that tyre advantage to displace them both, and was then lying in ninth place, looking good for some valuable world championship points. Sadly, it all ended for Seb through no fault of his own, as a result of a coming-together with an over-ambitious Schumacher. Equally, in the closing stages, Lance fell foul of [Kevin] Magnussen, who earned a penalty for causing a collision, as a result of which Lance ended up 11 th .

“In summary, the 2022 Miami Grand Prix was a disappointing race for us, but it is a great addition to the Formula One calendar and we hope that the spectators here all had an enjoyable day.”

By Nick Golding
2 Mins read
Toto Wolff is full of fire ahead of the Spanish Grand Prix and believes the best of the W13 is still yet to be seen.
Formula 1

By Nick Golding
2 Mins read
Haas Team Principal Guenther Steiner revealed that the team will not be bringing any upgrades to this weekend’s Spanish Grand Prix, the team will wait for later in the season.