24 Hours of Le Mans: Toyota and Corvette on Top of Practice Three 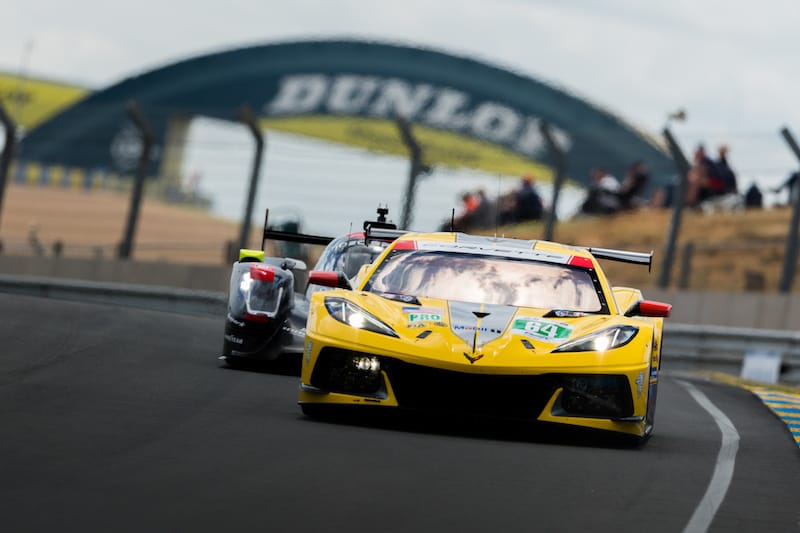 Toyota Gazoo Racing took a one-two in the final day practice session before the 24 Hours of Le Mans, whilst Corvette Racing continued their streak of having both of their cars finish in the top three in class during practice sessions.

It wasn’t a seamless run through the three-hour session for the #8 Toyota, which found itself stationary on track around the halfway mark of the session. An electrical fault saw Ryo Hirakawa moving slow down the Mulsanne, having to do a power reset before gradually making his way back to the pits. The team managed to get the issue solved and the car back out on track, but that will be a cause of concern for Hirakawa and team mates Sebastien Buemi and Brendon Hartley going into Hyperpole later this evening.

The fastest laps of the session were set early, with Kamui Kobayashi‘s 3:26.796 unchallenged throughout the three hours. Hartley’s best was three tenths down on the sister car, with Olivier Pla in the #708 Glickenhaus Racing third, two tenths further back.

The Alpine Elf Team LMP1 car finished 2.4s down as it has been so far this week, but a change in their Balance of Performance (BoP) will hopefully bring them into the fight for Hyperpole. The #709 spent some time in the garage this session, but made it out on track to set the fourth fastest time of the class.

Filipe Alburquerque gave United Autosports their first fastest lap of the weekend in class with a 3:30.964 in the #22. It was a United one-two ahead of FIA World Endurance Championship rivals WRT when Alex Lynn went 0.061s slower than Alburquerque. It couldn’t have been closer at the front, however, as Robin Frijns was only 0.06s behind Lynn’s time, seeing the top three covered by 0.121s. It is assumed that these three will be the qualifiers in this evening’s Hyperpole, so LMP2 will definitely be the class to watch.

LMP2 held the most incidents once again, with three more cars suffering heavy impacts with the barriers. The first to fall was the #30 Duqueine Team which went into the barriers at Indianapolis in the first hour of the session. It was recovered back to the pits but not seen again for the remaining two and a half hours. The #13 TDS Racing x Vaillante had a close encounter with the #31 WRT; Philippe Cimadomo looked to make a move around Sean Gelal through the Porsche Curves, cutting back too soon and catching the rear of the WRT. Gelal suffered no major damage but the spin saw Cimadomo heavily hit the barriers, pulling out a twenty minute red flag for repairs. The incident is currently under investigation.

Just after the red flag was lifted, the Graff Racing #39 had a moment coming into Arnage, ending up facing the wrong way with severe damage.

Corvette were once again on top of GTE Pro; Nick Tandy outpacing Richard Lietz with his 3:52.307. Lietz was four tenths off in the #91 Porsche GT Team, only just ahead of Antonio Garcia in the second Corvette. The usual pattern of Corvette-Porsche-Corvette-Porsche resumed, with AF Corse and Riley Motorsport both still suffering the power deficit of the BoP changes that came into action yesterday.

Where Porsche fought Corvette in Pro, they fought Aston Martin in Am. Mikkel Pedersen made sure Porsche were on top with the #46 Team Project 1, setting a 3:54.386, two tenths up on the second placed #33 TF Sport. The top three was rounded off by Hardpoint Motorsport, half a second off Pedersen’s best lap.

The #80 Iron Lynx was the best placed Am Ferrari, eight tenths slower than the Team Project 1 in sixth.