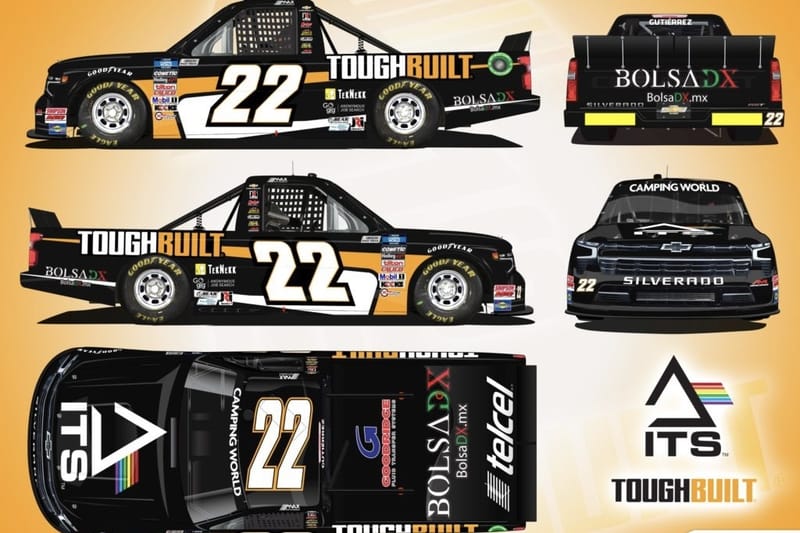 If you were to get a nickel for every unconventional case of “Double Duty” in Friday’s NASCAR Camping World Truck Series race at Nashville Superspeedway, you would have two nickels. It is not a lot, but it is weird that it is happening twice.

Camden Murphy has an interesting weekend schedule planned as he pilots the #30 On Point Motorsports truck followed by competing in Monster Jam at nearby Nissan Stadium the next day, but Max Gutiérrez‘s weekend itinerary has him crossing borders. After racing the Truck Series event in the #22 Chevrolet Silverado RST for AM Racing, he will return to his native Mexico to compete in the NASCAR Mexico Series at Trióvalo Internacional de Cajititlán on Sunday.

“This weekend is probably one of the most important race weekends of my life,” said Gutiérrez. “A lot of traveling, a lot of racing but a prime opportunity to compete for strong finishes in both races and I’m incredibly grateful.

“I’m excited about competing at a new venue at Nashville Superspeedway with AM Racing and building on what we started at Charlotte Motor Speedway and keep progressing forward during my limited schedule as we build a platform for the future.”

Gutiérrez made his Truck début in May at Charlotte, where he drove the #37 for AM Racing to a finish of twenty-sixth. While owner and #22 driver Austin Wayne Self continues to focus on being a father after his daughter’s birth, he will skip his third straight race.

“The NASCAR Camping World Truck Series is very competitive and I don’t expect Nashville to be any different,” he continued. “We don’t have a lot of practice time before qualifying and the race, so it is important to take the important steps to get a good balance with our truck and then continue to make adjustments throughout the day and night that will help us be competitive and contend for a top-twenty finish.

“A top-twenty finish isn’t going to be a cinch. It’s going to take a lot of effort, but I believe that the trucks that AM Racing brings to the track are plenty capable of allowing me to conquer my goal. If we can have a successful second showing at Nashville then it just makes the trip to Jalisco that much easier and gets me amped up for what can be accomplished on Sunday too.”

With Self sidelined, the team skipped the Sonoma round before returning at Knoxville with Brett Moffitt.

By Justin Nguyen
1 Mins read
Like with William Byron’s #27 last year, Rackley WAR will field a second entry for Friday’s NASCAR Truck race at its home race in Nashville as Tate Fogleman is in the #26.