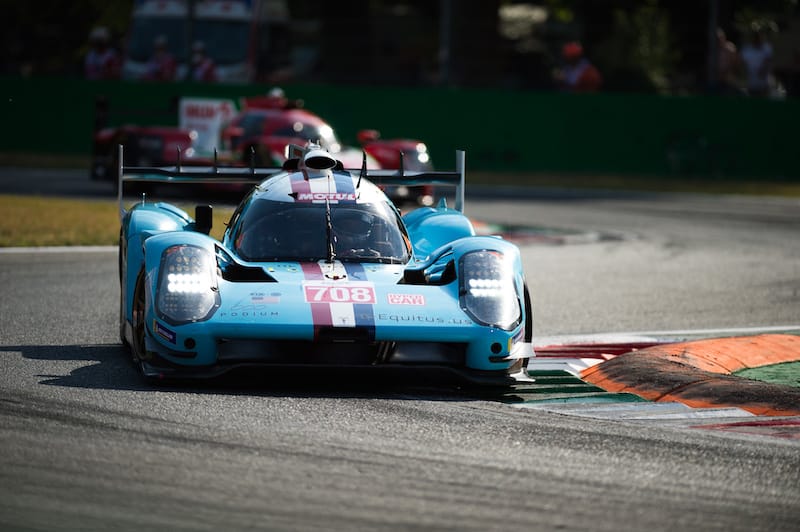 Repeating the performance from the FIA World Endurance Championship 6 Hours of Spa-Francorchamps, Romain Dumas put the sole #708 Glickenhaus Racing on pole position for the fourth round of the championship.

The driver of the 007 LMH machine set the fastest lap of the session, 1:35.416, at the end of a run of consecutive fastest laps giving the Privateer team just under a second advantage on the second-placed and 24 Hours of Le Mans-winning #8 Toyota Gazoo Racing. Brendon Hartley had been trailing much further than nine tenths behind Dumas, but a late improvement to a 1:36.335 closed up the gap before the premature end to the session.

Mikkel Jensen was the cause of the early end, bringing out the red flags as the #93 Peugeot Sport came to a halt on track in the Lesmo complex. The Dane had already had some issues during his first lap, going off at the first chicane. The #93 will start behind the LMP2 grid for tomorrow’s race, having failed to set a lap time.

Three different cars filled the top three as Nicolas Lapierre beat out the second Toyota for third on the grid. Kamui Kobayashi would have been third if not for a deletion of his four-tenths-faster lap time due to a track limits violation. Gustavo Menezes put the #94 Peugeot fifth in class, just three tenths off Kobayashi’s 1:36.919 in the French manufacturer’s first WEC qualifying since its return to the pinnacle of endurance racing.

Taking advantage of the red flag, Filipe Albuquerque stole LMP2 pole for #22 United Autosport from Mathias Beche in the #44 ARC Bratislava. Beche had been on par to take the second LMP2 pole for a Pro-Am line up of the season before Alburquerque’s late improvement beat him to the top spot by three tenths of a second.

Beche had been in a tight battle for pole before Alburquerque’s improvement, only 0.05s up on RealTeam by WRT‘s Ferdinand Habsburg. Habsburg had to settle for third in class, with Alessio Rovera, James Allen and Robert Kubica rounded out the top six in the #83 AF Corse, #45 Algarve Pro and #9 Prema Orlen Team respectively.

Bouncing back after a few races where they were hampered by Balance of Performance (BoP), Ferrari took home pole thanks to James Calado and Alessandro Pier Guidi. It was looking like a Ferrari one-two for the home crowd Tifosi as Pier Guidi jumped Antonio Fuoco for GTE Pro pole in the closing moments of the GTE qualifying session with his 1:45.270, but Nick Tandy in the sole Corvette Racing spoilt the party, splitting the two Ferraris by 0.004s.

Le Mans winning Gianmari Bruni and Richard Lietz had to settle for fourth, half a second off the battle front trio. They beat the sister car by two tenths of a second to complete the GTE Pro starting grid.

The day belonged to Ferrari at their home event with Sarah Bovy not only taking a Ferrari pole in GTE Am but also claiming the first ever female WEC pole position and pole position for a full female crew. Ben Keating gave Bovy a run for her money, lowering the provisional pole time by three tenths on his final lap, but she found the groove of the Temple of Speed to beat the Le Mans winning #33 TF Sport by two tenths with a 1:47.431.

The class ended with a Porsche two-three as the #77 Dempsey Proton Racing Spa-Francorchamps winning car took third on the grid, six tenths down on the sister Porsche.

By Alice Holloway
1 Mins read
Get ready for the FIA World Endurance Championship 6 Hours of Monza taking place this weekend.