George Russell: “It definitely hasn’t been our smoothest Friday this season” 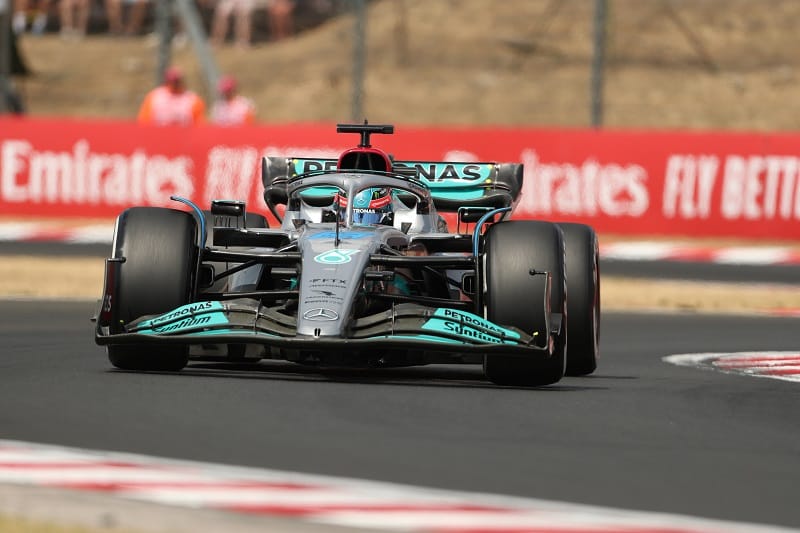 It was not the best of Fridays for the Mercedes-AMG Petronas Formula One Team at the Hungaroring, with neither George Russell nor Lewis Hamilton happy with the pace of their W13s.

The updates the team brought to the car last weekend at the Circuit Paul Ricard appeared not to work as well as they did seven days ago, with Russell ending the day eighth fastest and well adrift of the pace of Scuderia Ferrari and Oracle Red Bull Racing.

Russell said it was more like a test session for Mercedes on Friday, but it was disappointing to be further off the pace than they were expecting to be hearing into the weekend.

“It definitely hasn’t been our smoothest Friday this season, a bit of a strange one because we think it’s going to be wet for qualifying tomorrow and then different again on Sunday,” said Russell.

“We tried quite a few things with the car and used today as a test session so while it’s been a tough day, it’s probably been a productive one.

“Today was about gathering lessons long-term rather than maximising our lap times, but we were further behind than we probably expected with a couple of issues here and there. Tomorrow is going to be a totally new day and Sunday, we’ll be in a different place too.”

Hamilton was even further back in the overall times, the seven-time World Champion ending only eleventh in the second session, and he admitted it was a struggle behind the wheel of his W13.

The British racer says it was amazing to see how different the car felt in Hungary compared to last weekend in France, and Hamilton says there is plenty of work to do to be competitive around one of his most successful tracks this weekend.

“The car was a struggle today, it’s crazy how it swings from track to track and tonight we’ll be working on setup to try and get the car working,” said Hamilton.  “At the moment, it’s a little loose and not doing what we want it to do.

“Not much has changed since last week, I’m still the same driver! But for some reason at this track, the car isn’t working as well. In the glimpses where it was working, we were still down a second which was actually similar to last week.

“I didn’t get much chance of a long run at the end because I sustained some damage to my floor and lost a lot of downforce. It’s going to be a tough weekend, but we’ll give it everything.”

By Ashley Cline
2 Mins read
Aston Martin Team Principal Mike Krack was proud of the team’s performance at the Hungarian Grand Prix, having broken into the points after putting together a solid effort.
Formula 1

Sebastian Vettel: “Saturday performance needs to be a focus for the second half of the year”

By Ashley Cline
2 Mins read
Aston Martin’s Sebastian Vettel finished in the points with a tenth place result, with team-mate Lance Stroll just behind in eleventh at the Hungarian Grand Prix. Both drivers were happy with race pace, but agree that qualifying needs to be improved upon.
Formula 1

Fernando Alonso: “We are pleased to come away with a double points finish”

By Paul Hensby
2 Mins read
Fernando Alonso finished eighth for Alpine in the Hungarian Grand Prix on Sunday despite being forced to adopt a one-stop strategy.