“This track is just the best” – Lewis Hamilton 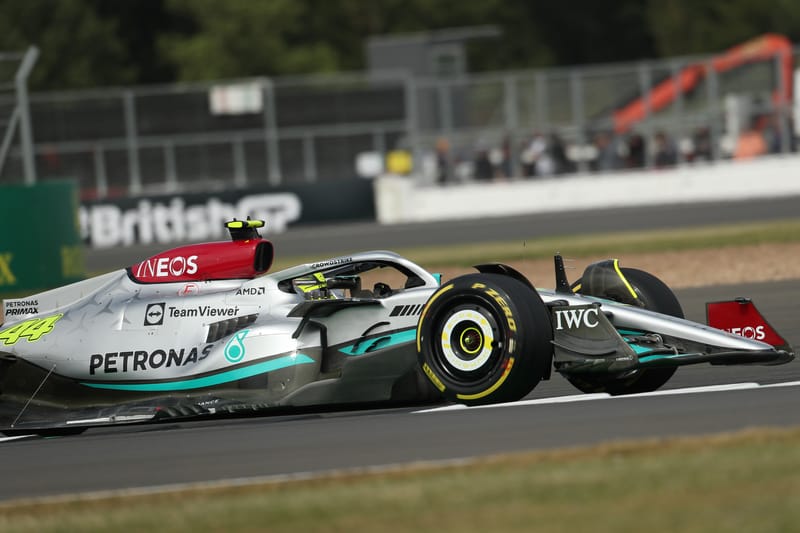 The British driver performed well on the opening day at the Silverstone International Circuit, after coming second in both the wet Free Practice One; dry Free Practice Two. Hamilton ended the day just +0.163 behind Carlos Sainz Jr, after the 37-year-old posted a personal best 1:29.105 at the end of the second session. Sainz was the only driver to tip into the 1:28s, however, Hamilton won’t be too concerned by this.

Hamilton will be concerned though by the W13 porpoising not down the straights but through the corners, something which the eight-time British GP winner wants the team to get on top of.

Overall though, Hamilton was very pleased with his first day performance, at a circuit he still finds “hair-raising”.

“It has been a good day, we managed10 laps in FP1 which was better than most, so I was happy with that. We’re bouncing a bit still, not on the straights but through the corners so we’ve still got work to do. It does feel like a small step forward but we’ve got to keep working. With this car you can’t drive the tracks the same as you used to, with how stiff it is and the ride characteristics, but it’s still fun through Maggotts, Becketts and also Stowe – it’s mega, my favourite corners.

“It was difficult to feel the upgrades because you’re coming from such a different track – slow speed corners in Montreal to the medium and high-speed corners here. The track is smoother than we’ve had recently which is much better but in general, this track is just the best, it’s still hair-raising to drive. Our long run pace isn’t as good as some of the other guys but it isn’t far off. The crowd give me hope, it’s so good to see them here and I appreciate the support so much.”

On the other side of the Mercedes AMG Petronas Formula One Team garage, it was a much tougher opening day for George Russell. The British driver ended Friday in eighth-place, virtually seven-tenths behind his team-mate.

Russell did perform well on race runs though, something which Hamilton admitted he needs to work on during Saturday. However, Russell struggled when it came to one-lap pace, something he wants the team to understand.

“I struggled on the low fuel compared to Lewis, he put in a very strong lap. The high fuel was definitely more promising compared to the McLaren which was also on the Hard. By the time our tyres warmed up, we showed good pace to the Ferraris and were improving lap after lap. Some positive signs there but definitely room to improve. We need to understand why our race pace is so much stronger than our single lap pace, the McLaren is very strong on a single lap but we just can’t get the tyres working over a single lap.

“Over the course of a race, we’re in a pretty good window but it’s always a balance, you can’t just put your eggs in one basket for Sunday. It’s a very different circuit to Montreal and Baku, we knew the car was going to be a challenge through the high-speed corners and that proved true through Copse, Maggotts and Becketts, the car was bouncing around, so we need to try and understand that. But we aren’t bouncing down the straights which is positive.”