The ageing Sunshine.co.uk Tech-Speed Honda Integra's show they still have a lot to offer after a great weekend for the team on the national circuit at Silverstone.

The ever popular Paul O'Neill took to the second step of the podium after the last race of the day thanks to a stunning drive which added to podiums at Thruxton and Rockingham. Team mate John George also had a good weekend out in Northampton although he failed to collect any points.

O'Neill had taken seventh on the grid for race one after a good qualifying session, and was to finish in the same position at the end of race one having spent the whole time keeping pace with Rob Collard in the WSR BMW. So it was seventh on the grid in race two also, and thanks to a good start from the Widness driver, he battled bravely with Matt Neal in the Honda Civic. Positions were swapped with Paul taking fifth from championship contender, only for Neal to lunge up the inside on the final bend to push O'Neill wide and snatch the fifth place back.

Disappointment was short lived as the draw for the last grid of the day took place giving Paul O'Neill Pole position thanks to his sixth place. Another good start in race three saw O'Neill hold the lead throughout the first lap until the safety car was deployed due to a start line incident involving Alex MacDowell and Martin Depper. By this time it was the two super quick Ford Focus's behind Paul who were no doubt keen to pass on the re-start. O'Neil kept a cool head as the safety car pulled in and kept Tom Onslow-Cole and Tom Chilton behind him. It was not long though for the Power of the LPG Ford enabled Onslow-Cole to pass on the Pit Straight to take the lead. However, Paul O'Neill Managed to keep Chilton at bay and take a well deserved second place at the chequered flag much to the delight of the crowd.

“Without the safety car, we had a chance to win that race but we lost the best of the tyres when it was deployed.” An exuberant O'Neill explained. “We knew the Ford's were going to be quick but I just went out there and raced my own race. I got my best start of the year and was able to defend well and second place is almost as good as a win. The fact I was able to pull away from Chilton is testament to the Tech-Speed team for the job they have done in giving me a great car. We don't have a big budget like some of the other teams, but every time I go out on track, the team tells me to do my best. That's exactly what I did and a podium is a great result.”

It was a good day too for team mate John George despite mechanical issues robbing him of points in the final race. Starting from 15th on the grid for race one, John had been delayed on the first lap and finished in 17th.  But the next two races were probably the best of his Touring Car Career although there were no points to reward him. 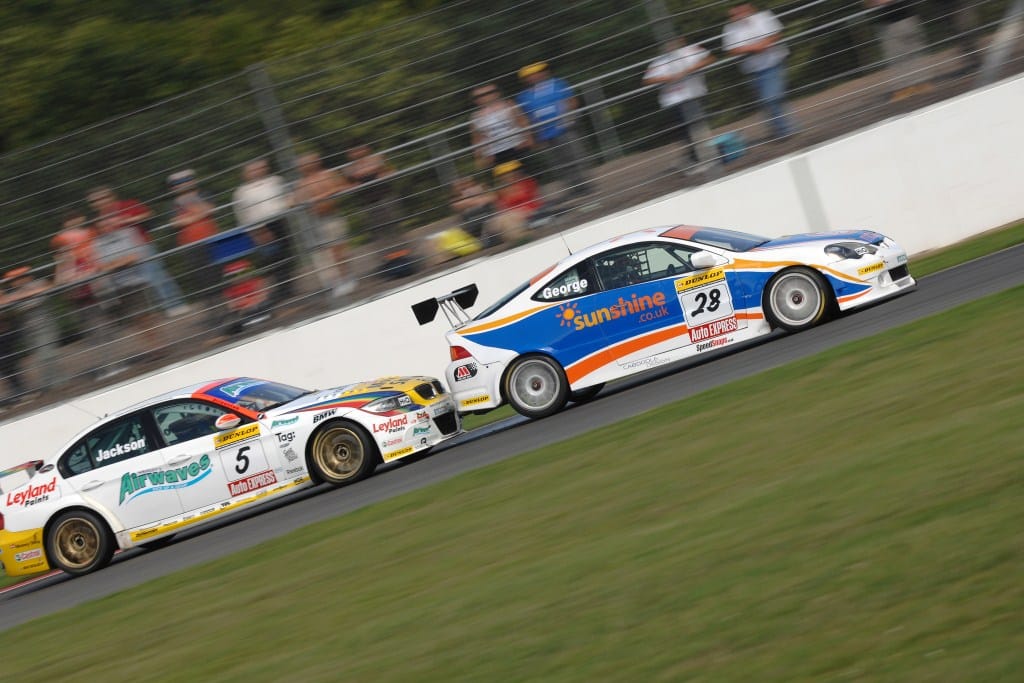 George had a great weekend for Sunshine.co.uk

Four places were made up by George on the opening lap in race two and a further position gain left him in twelfth and battling with James Nash for eleventh. Unfortunately Mat Jackson made contact from behind at Brooklands sending John into a spin and dropping him to the back of the field. Lesser drivers would have almost given up but George battled back bravely to take 14th place by the race end and making a points finish in the final race look a distinct possibility.

A solid start for the Guernsey man saw him pick off two drivers by the first corner. It wasn't long before a battle for ninth was taking place between George and Phil Glew. By this time Jason Plato was climbing up the pack after a first lap spin and took the tenth spot of John George. A mechanical issue then forced the Honda into retirement leaving George with no reward for a great days driving.

John spoke after the race to say “I knew all weekend that we had the pace in the car and it was great to be on it even if it is disappointing not to be able to score a point. This has been my best weekend ever when it comes to my own performance at the wheel of the car as I was able to dice with the likes of Jackson and Plato on track.” He continued to say “The incident with Jackson in race two soured it a little bit as he touched me a few times and didn't need to do that, but overall I can go away from the weekend happy with how I've performed.”

Chief of Tech-Speed Marvin Humphries told of his delight at the return to form after a tough weekend last time out at Snetterton. “That make up for Snetterton a bit” he said. “We've done a good job here and it went well, aside from the issue for John at the end. Paul was probably the only person who really gave the gas cars a race today and that was a great result to end the weekend with. Three top ten's and a podium isn't bad in this company.”

Sunshine.co.uk MD Chris Brown was also delighted with the weekends results but it was mixed emotions as he felt John George should have been rewarded for his hard work. “I didn't think Paul would be able to fight the Fords but he did brilliantly.” He said. “I kept expecting Chilton to find a way through, but Paul was able to drive away from him as he chased Onslow-Cole and second is a fantastic result. The second place at Rockingham was good, but here you could see he was hanging on for dear life and getting everything from the car. It was brilliant.” Attentions were then turned to John George. “I'm gutted for John as he was driving like a demon today. I honestly believe he is one of the most under-rated drivers out there. He really applied himself well on track and it is only though bad luck that his performance hasn't been rewarded with some points. Tech-Speed have once again done a brilliant job with the cars and the drivers have done us proud.”