The Aquila CR1 led the entire first hour of the 2010 Britcar 24 Hours, WTCC driver Rob Huff pulling out to nearly a 30 second before second safety car intervention bunched up the pack in the closing minutes of the first 60 minutes.

Such is the pace of the Wessex Vehicle entered car that it has already lapped up to the top three, the no.22 Jet Alliance Porsche – the leader in class 2 – being the final car to be lapped before the safety car came out for an accident at Bridge.

While the start – blessedly – was clean several teams hit quick trouble. The Synchro Motorsport entered Honda Jazz Type R has already banked two lengthy pitstops, only completing four laps, and the Strata 21 Mosler – the car that started second – struggled with a gear selection problem. Calum Lockie pitted the car, but the team opted to send him back out again, deciding that they could continue on – hopeful of fixing the problem later in the race during a longer stop.

However, the early casualties were led by the Chevron GT3. With BTCC star Paul O'Neill at the wheel the car had climbed from 20th to 16th but the car spun at Stowe in the early laps, bringing out the first safety car. 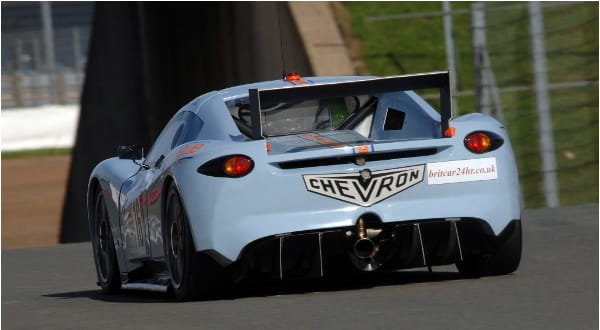 The Chevron - when it was still running

While Britcar 24 rules allow a car to be brought back to the pits to be repaired before rejoining the race, and the Chevron was hauled back to the pits on the rear of a flatbed lorry the team have been forced to withdraw. The team reported that the car hit the pit wall last night, and while the car was thoroughly inspected before the start of the race – and cleared of any major damage – the impact had damaged the chassis.

Problems also struck the Speedworks Ginetta – a familiar name to British GT fans – the G50 being another car to be brought into the pit on a flatbed.

The Team Lotus Evora had led the GT4 cars from the start before losing position to the RJN Motorsports Nissan – Chris Buncombe at the wheel of the 370z. The car was then hit off the track at Stowe by the no.42 Porsche while fighting to keep second in class. Both cars were able to continue , though the Porsche forced its way past.

Class Standings After One Hour: