Rob Huff came out on top of a three-way battle with Chevrolet teammates Alain Menu and Yvan Muller to win the first of Sunday's two World Touring Car Championship races at Monza in Italy.

Huff led the field away from pole position on the rolling start, the Chevrolet trio streaking off into the lead. The three drivers would spend the race fighting with each other for the lead. Menu took second place from Muller at the first chicane on the second lap, having got alongside the Frenchman through the parabolica at the end of the opening lap.

The Swiss driver put Huff under pressure for several laps, making contact with the Briton through Ascari on lap six. Menu failed to find a way through though, and then came under pressure from Muller. On the final lap Muller made a move on Menu going into the first Lesmo but when Menu moved to defend the inside there was contact between the pair. Menu was sent into the barrier on the inside before spinning across the track in front of Muller and into the gravel. 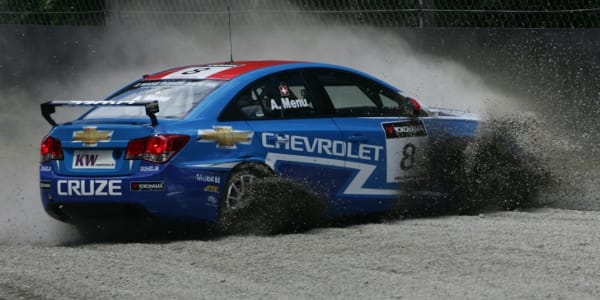 Menu's race ends in the gravel after contact from Muller

Huff recorded his third win of the season, with Muller in second. Tiago Monteiro took fourth from Norbert Michelisz at the start of the race, but came under pressure from the Hungarian in the closing laps. The Zengo BMW driver took the place back on the penultimate lap, and inherited third when Menu crashed out. However, as SUNRED SEAT driver Monteiro applied the pressure on the final lap Michelisz made a mistake in the parabolica. Monteiro pulled alongside and got his nose in front by the line, taking third place by just three hundredths of a second. Michelisz did still get to stand on the podium though as the top Yokohama Trophy finisher.

Tom Coronel finished fifth in the ROAL Motorsport BMW, with Kristian Poulsen sixth in his Engstler BMW. The Dane made contact with Gabriele Tarquini earlier in the race, the Italian eventually retiring his SEAT.