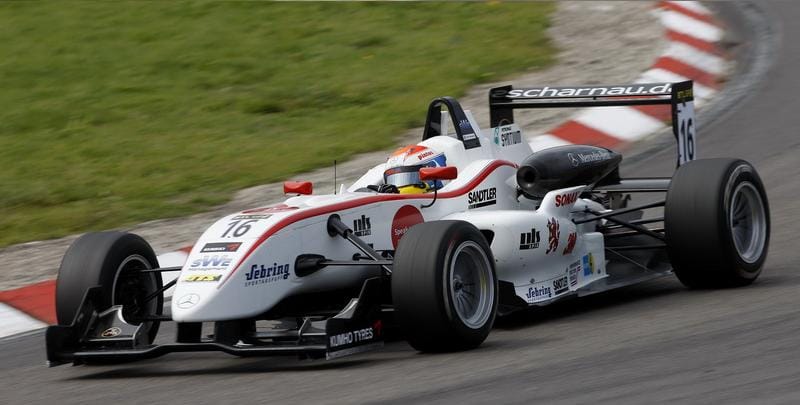 The Silverstone circuit in Northamptonshire will play host to the F3 Euroseries for the first time in the series’ history this weekend, as the open-wheel category swaps the DTM calendar for Le Mans Series 6 Hours of Silverstone.

Rounds 19-21 of the 2011 season will be contested on the full length grand prix circuit, and championship leader Roberto Merhi will be keen to extend his 64 point lead over team-mate Daniel Juncadella. Merhi’s main trio of rivals however, are separated by merely 9 points, as the scrap for 2nd place becomes increasingly intense between Juncadella, Marco Wittmann and rookie Nigel Melker.

2011 F3 Masters winner Felix Rosenqvist is also eager to get back into his Dallara F308 and make ground on the chase for 2nd place. Felix, who currently lies 5th in the standings ahead of Laurens Vanthoor, is buoyed by his success at Zandvoort last month, as the Swede took a comfortable victory after Prema team-mates Merhi and Juncadella tangled off the start line.

“To date, I have been at Silverstone just once – on the occasion of the roll-out of the then brand-new Dallara F308.” Felix said. “Quite obviously, I've set myself the goal to secure as many points as possible, this weekend. After all, I want to work my way further up, in the championship ranking. Following my Masters win I realised that securing one race win attracts more attention than finishing second a hundred times but now, in the remaining rounds of the season, it will be crucial to score constantly and avoid taking any unnecessary risks.”

Supporting the Le Mans Series will also give the current Euroseries contenders a glimpse at their potential future careers, as many F3 Euroseries front-runners have chosen sportscars over higher formulae. Aston Martin Racing’s LMP driver Christian Klien is one of the more notable examples, along with 2008 Le Mans Series Drivers champion, Alexandre PrÃ©mat.

Merhi cannot seal his F3 title with 2 meetings to spare as British F3’s Felipe Nasr did last week,  as his points margin isn’t as dominant. But with 60 points up for grabs at every weekend, Merhi cannot afford to truly relax, especially as his closest rivals will be going flatout to claim 2nd place, or possibly more.