With only 3 races remaining of the 2011 season and the title deservedly belonging to Brazilian Felipe Nasr, the attention of many shifted to the increasingly close battle for championship runner-up between Carlin team-mates Carlos Huertas and Kevin Magnussen, with William Buller and Rupert Svendsen-Cook peering in with outside chances of 2nd place.

Magnussen and Huertas arrived at Silverstone merely 1 point apart, but via wildly different paths – Magnussen was one of the few drivers in the field capable of besting Nasr at every race, but mechanical failures and dramatic crashes frequently denied him from mounting a genuine championship challenge. Huertas conversely, hadn’t been the fastest but certainly the most consistent driver in the field all season and top 5s at least once a weekend had paid off for the Colombian so far. So with only one weekend left, it was time to see which method would ultimately come out on top.

For the finale at the Silverstone circuit, a handful of invitational entrants also used the meeting to keep their F3 skills sharp – Alexander Sims joined Motopark Academy as the British GP3 and ex-F3Euroseries runner eyes success in the prestigious Macau GP in November, whilst fellow GP3 rival Mitch Evans would compete thanks to Double R racing.

Cool and cloudy conditions greeted the competitors as the British autumn started in earnest, but in qualifying it was Magnussen who outshone both Huertas and Nasr to clinch a valuable double-pole for Rounds 28 and 30, giving him the best chance to claim 2nd place overall. Huertas managed 5th and 2nd respectively, whilst Double R’s Scott Pye grabbed an impressive second row grid slot for race 1 ahead of Rupert Svendsen-Cook. Buller could only muster 11th and 10th, where an uphill battle for the runner-up honours awaited.

Magnussen led away cleanly off the line to keep his lead, whilst Scott Pye impressed again as he slipped past Nasr into T1 and forcing the champion into 3rd.

Svendsen-Cook maintained his position at the start, but his time at the front of the field was short lived, as a mistake followed by contact at Chapel saw the Carlin driver fall back down the order, effectively ending his already slim chances of 2nd in the championship.

Magnussen quickly began stretching his lead over Pye, and despite the Australian’s new-found pace, left the 2010 British Formula Ford champion trailing. Nasr settled into 3rd in the typically calm opening race of the weekend, whilst a scrap for 4th headed by Lucas Foresti (who had started in 10th), Jazeman Jaafar, Buller and Huertas brewed behind.

Jaafar eventually got past Foresti and began reeling in Nasr, but petered out as the laps wound down. Foresti also managed to break free from Buller, leaving his Fortec team-mate to fend off Huertas,  Sims, Pietro Fantin and Jack Harvey respectively.

At the front, Magnussen cruised home 8 seconds ahead of Pye to take victory and leap-frog Huertas in the championship in one fell swoop. Nasr finished 3rd ahead of Jaafar and Foresti. Buller just managed to hold off the chasing quartet to claim 5th place – all 5 separated by just over 2 seconds. Huertas, Sims, Fantin and Harvey rounded out the top 10.

Magnussen said afterwards: “Felipe isn't the most important person I have to beat because it is me and Carlos who are fighting it out for championship second. Everything worked out perfectly in this race; the car was awesome, I made a good start and after that everything went my way really.” 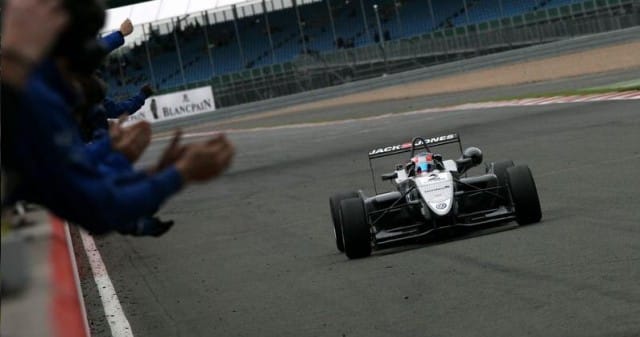 A slippery Sunday Silverstone thanks to overnight showers meant head-scratching aplenty for the teams ahead of the Round 29 sprint-race. More cold temperatures ensured the track stayed damp, and ironically the best solution to clear the moisture would be hard running.

2 sighter laps for each driver resulted in an almost even split between the field – just under half chose slicks in hopes of rising track temperature, while the remaining drivers, including Alexander Sims, Menasheh Idafar, Pipo Derani, Lucas Foresti, Jack Harvey and pole-sitter Pietro Fantin – the majority of whom made up the front rows of the grid – elected to start on wet tyres.

As the red lights faded, slick shod runners including Nasr, Magnussen and Huertas made tentative getaways off the line. Wet-fitted Foresti however, disappeared off the line and leapt an excellent 5 places to lead the opening lap from Fantin and Sims.

Though Foresti seized the early advantage, Sims soon started to set the pace, overtaking Fantin at Vale and setting his sights on the leading Brazilian.

Further behind, those on slicks tyres were easy prey for those on wets, as Harvey, Derani and Idafar scythed through the field and into the top 6. – Idafar all the way from 19th on the grid after a stunning opening lap for the T-Sport driver. Nasr headed the dry-tyre pack from Huertas and Magnussen, the trio helpless as the track temperature stayed low.

Sims soon had Foresti lined up by only lap 3, and an assertive move down into Brooklands relieved Foresti of the lead. From then a series of fast laps, all nearly a second quicker than Foresti gave Sims a healthy lead by the half way stage.

In the closing stages of the race, the slick tyres finally began generating the heat they desperately needed, and soon it was Magnussen posting the fastest laps of the race. With Huertas ahead, the Dane made his ambitions to maintain his points advantage clear with a bold move around the Columbian with 3 laps remaining. Only 2 laps later, Magnussen also picked up the 2 bonus points for the fastest lap.

In was a perfectly judged victory for Sims, who awarded Motopark with their 1st victory of 2011 in impressive style. Foresti crossed the line 7.8s behind, with Fantin another 7 seconds down the road.

Idafar finished a dazzling 4th with his fine form on the slippery tarmac and easily ahead of Derani and Harvey. Harvey was the only Carlin driver to opt for wets, but still only managed to beat Nasr by a mere 0.012s as the slick tyres came into their own. Magnussen followed Nasr home for 8th ahead of Huertas, with T-Sport’s Yann Cunha rounding out the top 10, also on wets.

Buller could only manage 12th after starting on slicks whilst Svendsen-Cook struggled to 15th, ending both their hopes of being championship runner-up.

“We didn't have much time on the grid to make the call on tyres but when I came round to the grid, my engineers felt the tyres and I'd not been able get any heat in them so it was clear wets were the way to go,” Sims said.

“It was quite challenging initially as Foresti and Fantin were ahead of me at the start as they got away better than me, but I realised quite early that my pace was good and that we'd made the right tyre choice. It was all about managing the tyres and then when I got in front, pushing to build my lead.”

By the afternoon the circuit was still cool, but importantly dry. With 2 finishes ahead of Huertas already, Magnussen lined up on pole with a little more breathing room than he’d been used to in the previous races. At the start however, it was Huertas with the best traction off the front row and squeezed up the inside of his team-mate to take the lead – Magnussen was forced to settle in behind and give chase.

Behind, Nasr made a poor start and quickly found himself swamped by rest the field. Unsettled and out of position, HiTech’s Max Snegirev caught the new champion unaware and made sizeable contact exiting Vale. Snegirev was out on the spot while Nasr tried to limp on, but the Brazilian was forced to retire once he reached the pits.

Rupert Svendsen-Cook enjoyed a much more solid performance, overcoming Foresti – who started well once again – and consolidating his 3rd place on track. Foresti’s start had seemingly come at a cost however, as front-wing damage picked up in the early laps saw him run wide exiting The Loop, allowing guest Kiwi teen Mitch Evans into 4th place on his F3 debut with Buller following suit.

Huertas and Magnussen began to pull away at the front, the pair ran nose to tail but Magnussen was never able to find a way past. By the chequered flag Huertas led his team-mate over the line by only 0.5s. Magnussen would have the last laugh, as 2nd place was more than enough to secure 2nd place in the championship. Svendsen-Cook finished 3rd to complete a Carlin 1-2-3 ahead of an impressive Evans.

Buller ended up 5th ahead of team-mate Foresti, with Race 2 winner Alexander Sims only 0.3s behind. Fantin was 8th and Jazeman Jaafar took 9th ahead of SinoVision’s Hywel Lloyd, who rounded out the top 10 with a solid performance.

“I'm very happy,” Huertas said. “I've been close a few times, especially last year when I lost two races I shouldn't have lost. This year the opposition has been tough and I've been close a few times. I wanted more wins but it's all part of the learning process and I'm very happy. I got a good start and had the inside line so I just kept it fair and then pushed to the maximum every lap.

Huertas was pleased to exit in style from British F3 after his 3rd season in the series, and hinted at his future career options:  “What I do now all depends on budget but the team working with me are looking at World Series, and that is a realistic option. I still have one more race in F3, at Macau, which is a special race with a lot of good drivers, but that's the end for me now in British F3.”

Magnussen was happy to clinch the runner-up spot, something which he admitted was tougher than perhaps it should have been: “I'm happy to be second after a tough year as I've had a lot of bad races this year,” he said. “I've learned so much and it's been a great experience that I can take a lot from for next season. This is the first time I've finished on the podium without winning. That is a lesson I think: that everything counts and you need to take what you can and be patient.” 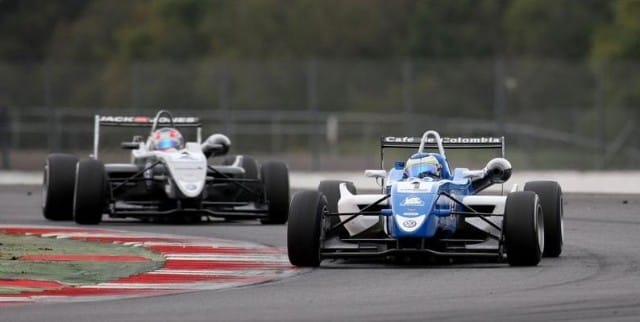 Ultimately, few could deny Magnussen 2nd place in the championship – and though Nasr’s dominance has been exemplary, the 2011 points tally will always belie the constant threat of the young Dane in virtually every round this season. Consistency didn’t work for Huertas, nor did sheer speed work for Magnussen, but supremely controlled doses of each by Nasr provided the perfect recipe for an impeccable championship campaign.

The 2011 British Formula 3 series resumes next year with preparations for the 2012 season – though several of this year’s British F3 protagonists, including Felipe Nasr and Kevin Magnussen will compete at this year’s Macau GP on 20 November. Provisional entry list here.