The TCF Team Pick – Driver Of The Year

Nine winners from 2011, and two who lost their lives trying to join them

The twelve months of 2011 have been twelve months of contrasts, a twelve months packed with the highest of highs and the lowest of lows. In this, the first of four articles where the authors who brought these highs and lows to the pages of The Checkered Flag, look back at 2011 and pick their ‘Driver of The Year’ including a man who won two British GT races, an F3 runner-up and somebody called Vettel.

Romain Grosjean
After seeing off the challenge of Jules Bianchi to win the four-race Asia Series in February/March, “Big John” was kept on his toes during the early rounds of the main series campaign. However, he found another gear mid-season as his early rivals faltered, claiming four races wins in as many race weekends before claiming the title at Spa. After never having been given a proper chance first time around, Grosjean has now earned himself a well-deserved return to Formula 1, getting the chance to go head-to-head against new teammate Kimi Raikkonen at Lotus.

Sebastian Vettel
Within Formula 1, to pick anybody other than Sebastian Vettel as Driver of the Year would be deeply unfair to the German. He may have had the best car, but it takes some skill to claim 15 pole positions, 11 race wins, and lead a ridiculously high percentage of racing laps over the course of a season. Fans of Jenson Button and Fernando Alonso can rightly claim that their drivers had good seasons, but both finished someway behind the double world champion.

Sebastian Vettel
It has to be Vettel. It will be a very long time before we process his extraordinary achievements from 2011. The RB7, although still the fastest car on the grid, was not as dominant as its predecessor the RB6, but Vettel’s sheer pace in the car was sol destroying for the rest of the field. If I had to choose one stand out moment, it would be his breathtaking pass on Fernando Alonso at Curva Grande; simply phenomenal, as he was all year.

Kevin Magnussen
Yes, he may have finished second to Felipe Nasr in the British Formula Three Championship, but Kevin Magnussen was the fastest driver whenever he got the chance. That speed, coupled with an aggressive streak made him scintillating watching – passing Nasr twice around the outside of Riches, for example. With better luck, fewer mechanical problems and fewer instances of that aggressive streak ending in accidents, I have no doubt that the Dane would have pushed Nasr all the way for the title – at least.

Kevin Magnussen, according to James Broomhead the fastest man from British F3's class of 2011

Jamie Whincup
I'm a big Craig Lowndes fan, he put in some phenomenal drives to close the gap at the top of the standings this season – three wins out of three at the Ipswich 300, finishing sixth at Sandown after starting from 27th in a race that had other drivers screaming down the radio claiming conditions were too dangerous. But there's no doubt that the class act of 2011 has been Lowndes' teammate, Jamie Whincup – ten race wins, nine pole positions, a third championship win in four years, and for the fifth consecutive season he's finished inside the top two – and for that Mr consistency, Jamie Whincup gets my vote. 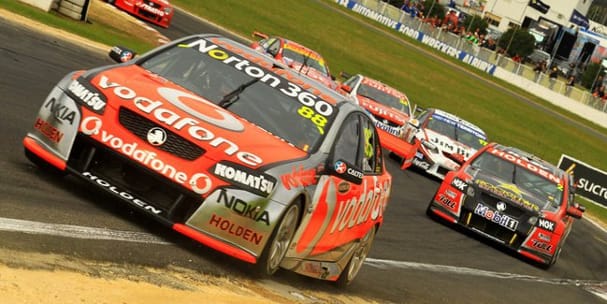 Jamie Whincup took back the V8 Supercars title, and a driver of the year nod from the TCF team

Sebastian Vettel
There’s certainly been no shortage of dominant championship campaigns across many disciplines this year, but Sebastian Vettel‘s has to stand out above the rest. His record-breaking season has been and will continue to be praised in detail for years to come, so there's little to add – so for F1 fans and even Seb himself, 2011 was simply an awe-inspiring discovery of just how much talent the young German has.

Jonny Adam
Many names spring to mind in various race series but the driver who sticks out for me is Jonny Adam. Making the switch from BTCC to British GT with a seat in the Beechdean Motorsport Aston Martin he certainly took to the series like a duck to water. Quite literally, as his performances in the wet behind the wheel of the now aging DBRS9 proved as he was challenging the newer machinery at the front and claiming victory at a wet Rockingham. Adam certainly gave the Aston Martin a fitting farewell in its final season and with the teams switch to the new V12 Vantage Aston looks set to build on his impressive debut season in British GT next year.

Sebastian Vettel
This accolade can only be for Sebastian Vettel. For all his critics who claim he has the best car or isn't action orientated enough, the World Champion continues to drag 110% from what he drives to ensure he doesn't have to fight in the pack – the mark of a true great. His ability to drag a large gap before the DRS kicks in deserves a mention, as does his wheel-to-wheel fight with Fernando Alonso at Monza. Vettel's pass on Lewis Hamilton in Korea was also brilliantly done and won him the race.

Canada apart, there were few errors, just pure brilliance. What more could you ask for?

Dino Zamparelli
A class apart on and off track, 2011 Protyre Formula Renault BARC Champion Dino Zamparelli is my driver of the year. Dino overcame a slow start to the year to control a competitive BARC series, a highlight being his dominate display at Thruxton, where he took pole by 0.6 seconds before winning both races, leading to a deserved championship title and finalist spot in the McLaren Autosport BRDC Award. Off track, Dino conducted himself professionally throughout the year, coping well with all the problems and pressure he faced to take the championship and restart his career.

Jenson Button
He always seemed to be there bugging Vettel. Along with Alonso and Webber he was one of the few that actually took the fight to the defending World Champion. He stepped things up this year and made himself the lead driver for McLaren in a team that started the year in a very equal situation between himself and Lewis Hamilton.

Marco Simoncelli
No review of 2011 would be complete without mentioning this man. Casey Stoner was the deserving champion but 2011 will always be Marco's year. He showed front running pace all season and that maiden victory looked very close indeed. The tribute in Valencia two weeks after his tragic death will live long in the memory. In terms of who impressed me most in 2011, Maverick Vinales gets my vote for a sensational rookie season in the 125cc class. Three poles, four wins and just 52 points away from the eventual champion, all at the age of 16. You'll hear his name a lot in the future.

Marco Simoncelli
This isn’t just a posthumous “Honor” that I am bestowing on the fallen Italian for the sake of it. The gangly, afro haired nutter on two wheels captured my imagination a few years ago, but the way that Simoncelli exploded out of the blocks at the start of the season was a delight to watch. His, almost anarchic way, he would attack the field, going for overtakes that others branded as dangerous, made Simoncelli a fan favourite. He may have had his flaws, with many notable incidents, the most controversial of which was his coming together with Pedrosa at Le Mans, which left the tiny Spaniard with a damaged collarbone. After this incident, Simoncelli was almost treated like an outcast by many of the grid, with Lorenzo even saying he should be arrested.

This only made the fans love him more, and when Marco finished second at Phillip Island, there was a sense that a man already thought of as a legend by many, was on the verge of his maiden win. However, his untimely passing in Sepang has now left the sport with a massive hole on the grid, as riders like Simoncelli don’t come along very often.

"A joy to watch" - Marco Simoncelli

By Robert Percy
2 Mins read
Romain Grosjean was one of the best drivers out there when he was at the top of his game, according to his now-former Team Principal Guenther Steiner.
Formula 1

By James Thomas
2 Mins read
McLaren’s switch to Mercedes power for this season has meant that their 2021 challenger will be ‘essentially a new car’ in spite of the Covid-induced design carryover.
Formula 1

By James Thomas
2 Mins read
Williams Racing say the design planning for the 2021 and 2022 cars will be crucial to perfect in order to capitalise on both seasons.