Audi A5 Set For Zandvoort Premiere 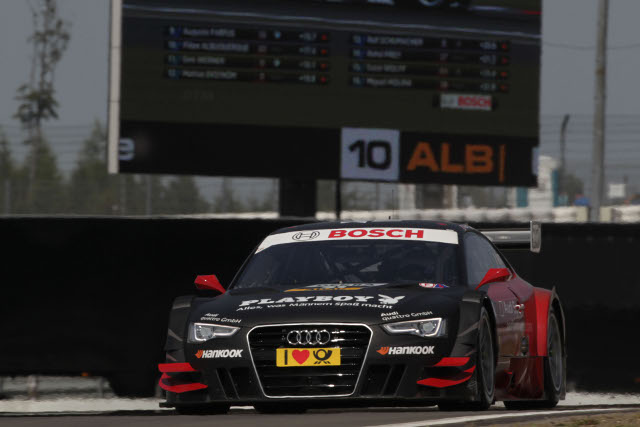 Cooler and changeable conditions await all the works Audi drivers, who will compete this coming weekend in the new Audi A5 DTM for the first time at the Zandvoort circuit, after a blazing hot battle in the sunshine covering the Eifel Mountains. The Audi Sport squad made a huge impact at the Nurburgring on Sunday after a welcome return to racing after the summer break, with Team Rosberg’s Edoardo Mortara finishing just over six seconds behind BMW’s Bruno Spengler.

Since becoming part of the DTM calendar since 2001, it is a firm favourite with many of the Audi drivers, with the A4 DTM having been very much at home on this rollercoaster-style track. This is clearly the case with the previous spate of results, as Audi have won five of the last eight races there, with Team Phoenix’s Mike Rockenfeller having taken top honours last year.

Both Mortara and Rockenfeller lead Ingolstadt’s assault this year at present, both equal on 49 points, with Team Abt Sportsline’s Mattias Ekstrom only 2 points behind. Both Ekstrom and team-mate Timo Scheider have enjoyed racing around the famed Dutch circuit, which has held F1 races in its glorious past.  Both drivers have their fair share of experience to call upon around Zandvoort, with Scheider having secured Pole Position 3 times, and Ekstrom having his fair share of success.

But as with all the teams and manufacturers, everyone is working harder than ever to get things ready for this weekend with all A5 DTMs being prepped on site at the Nurburgring, before being taken to Zandvoort in anticipation of a double-header.

Head of Audi Motosport, Dr. Wolfgang Ullrich, said that the cars have moved forward well after the summer break, but the ultimate goal is the target this time around: “Our next aim is to convert this into a victory. The track at Zandvoort has provided us with a number of good results before – we work to ensure that things will be going so well also this year.”

Arno Zensen, Team Rosberg’s Team Director, is hopeful of continuing success after their strong showing in qualifying, as well as Mortara’s well-earned second place at the “Green Hell”: “We want to take this momentum to Zandvoort next weekend and are hoping to be able to continue these successes.”

Hans-Jürgen Abt realizes that time is not on anyone’s side, especially with the quick turnaround between races, but is hoping his drivers will provide a welcome resurgence: “Obviously, this puts an extreme strain on everyone. But we like Zandvoort and are hoping to regain our old strength there and to be in contention for victory.”

But Ekstrom is the driver most looking forward to making a welcome return to the podium, especially as his form has been somewhat lacklustre of late, and with fond memories of his first win here, he looks to make it count: “Zandvoort is one of my favorite tracks. I’ve driven many races there and have a lot of fond memories – for instance of my first DTM victory in 2002. After a few weekends on which we found ourselves struggling I’m hoping for a straightforward and solid race.”

So with Audi looking to make the best of their summer break developments, it could be the case that the grid could be turned up on its head, depending on what the weather decides to do this weekend.