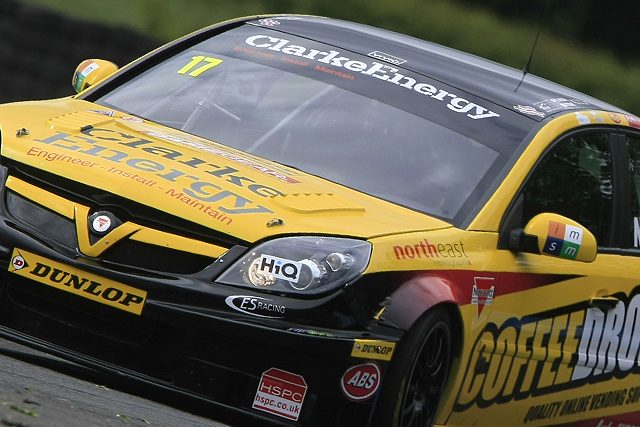 Dave Newsham fears the Next Generation Touring Cars could be uncatchable in the second half of 2012 – but is determined to make an impression whatever happens.

Newsham, who took a remarkable pole position in the season opener at Brands Hatch in his S2000 Vauxhall Vectra, believes the big teams have cracked the development of their new cars and that when the Dunlop MSA British Touring Car Championship returns from its summer break at Snetterton, it could be the start of NGTC domination.

“They were struggling early on I think to find the pace but now they've found it I think we're going to struggle,” the ES Racing ace told theCheckeredFlag.co.uk. “I think we've missed our chance to win this season. Our cars have got as quick as they're going to get and there cars are only going to get quicker.”

Despite ending race one at Brands Hatch in the gravel trap after contact with Jason Plato, Newsham recovered to finish on the podium in race three. Since then, things have not gone to plan, and a variety of mechanical problems and individual errors have plagued the relatively inexperienced outfit. “From that point of view,” he explains, “it's been frustrating.

“At the start of the season we showed good pace but we haven't been able to string three decent results together in race weekend yet. If it happens in the first race you're always playing catch up.

“I think we should be further up. You look at the people that are all ahead of me in the championship they're all season, experienced, big-budget teams and drivers.”

Despite the problems, the 45-year-old is enjoying mixing it at the front with more seasoned teams and drivers. And even if the gap between the NGTC cars and the S200s continues to widen, the Scot is determined to make the most of what he has.

“The thing I always like when I watch the replays,” he says, “they show the top eight faces in the championship and I'm still on that screen, and that's what I'm really proud of – I'm hanging on there, if you look at all the other drivers there, you think 'crikey, we're right in there'.

“We're going to struggle against those [NGTC cars] now and my aim now is to be beating or to be on the same pace as Mat Jackson, Rob Collard and the other S2000 guys. If I can beat Mat without him having any problems that'll be as good as it's going to be.”

By Samuel Gill
3 Mins read
After a major crash at Oulton Park, Dan Lloyd returned to begin Sunday’s BTCC action at Croft with an emotional win on home soil in his first top step appearance in four years.
Formula 1Other

By Joe McCormick
5 Mins read
Max Verstappen was able to hold off Carlos Sainz Jr. to take an excellent victory in Canada.