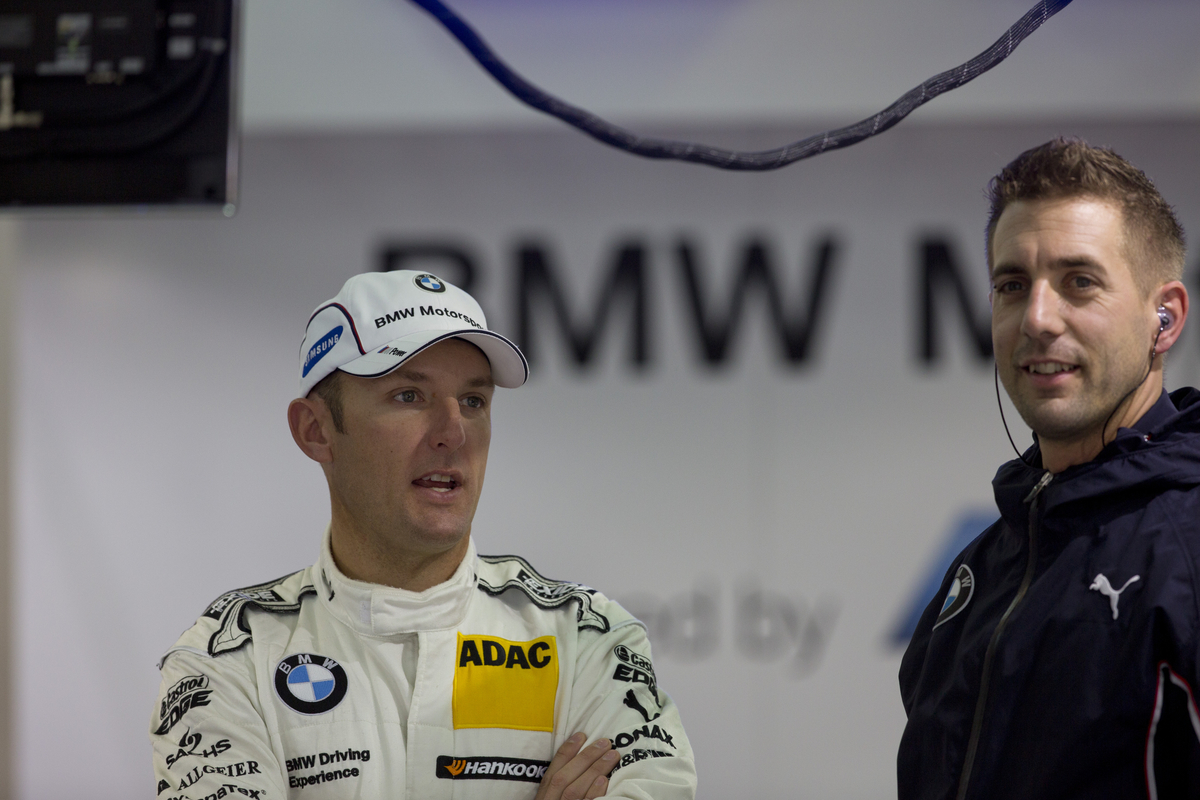 Team RMG’s American addition, Joey Hand, has had a credible season in the DTM this year, as the Sacramento native has had a very eclectic and diverse racing career in the USA, before taking on the challenge of competing here in Europe for the very first time. with his best finish this year being at the Red Bull Ring, where he finished in 9th place.

He started, like every aspiring driver, in karts at the age of 12, before moving up to the Star Mazda Series in 1998, where he took top Rookie honours that year, before going one further, and winning the overall title the following year. His subsequent elbow injury that year, which he sustained in a karting accident, somewhat halted his progress in securing a race seat for 2000, before competing for the DSTP Toyota Atlantic team in 2001, and yet again showed his potential by winning the “Rookie-of-the-Year title.” 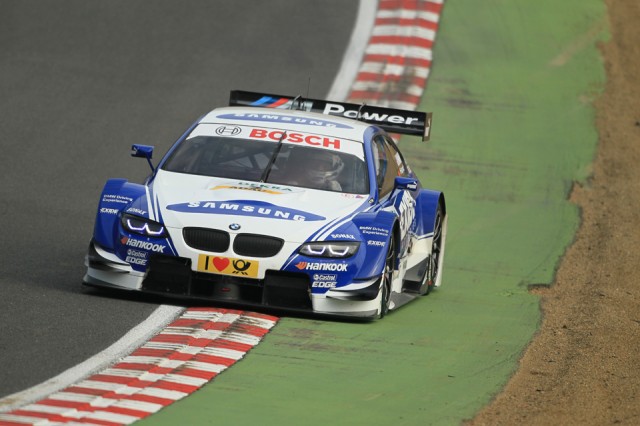 Hand getting to grips with the M3 DTM at Brands Hatch (Photo Credit: Octane Photographic)

He suffered several injuries the next year at the Milwaukee Mile, during a testing accident, which sidelined the American hopeful for six races. Hand came back after his recovery, and secured top five finishes in the first three races on his return. He has also raced for BMW North America from 2004 onwards, as well as Chip Ganassi and PTG Racing, where he drove BMWs and the Panoz GT car, and has some great success in the world of sportscars, which includes winning the 2011 Rolex 24 Hours and the 12 Hours of Sebring.

Joey has had a busy 2012 on all accounts, pulling double duty both here in the DTM, as well as taking part in a reduced ALMS campaign with Team RLL, so it was interesting to find out from him how he has adapted to the DTM, as well as his thoughts on BMW’s return, plus his view on racing in Europe, as he spoke to us here exclusively at theCheckeredFlag.co.uk.

Switching between vehicles can be difficult at the best of times, as Joey explained that there were some doubters saying that he may not be up to the task of the constant travelling, the championship formats and the varying differences of the cars. However, the Californian seemed to be taking things in his stride, but knew that learning is still a big part of the job as a racing driver: “For me the ALMS is so familiar that when I go back there to race it only takes me a couple of laps to get used to the car again. Things like the roll are different to the DTM car, but I know these cars so well so just slot back in. Also I am lucky to have two amazing teams – BMW Team RLL and BMW Team RMG – on either side of the pond.

“They make the transition so easy for me and wherever I am racing I really feel at home. Obviously I have had a lot to learn in the DTM, but it was perhaps more about the idiosyncrasies of the series than the cars themselves. I am a racing driver by profession and I like to think I can very quickly adapt to whatever machinery I am racing.”

His links with BMW Motorsport are well established, as he was waiting for the chance to compete and represent “The Ultimate Driving Machine” brand over here, especially on their comeback season in the DTM, and said that he wouldn’t have done so beforehand: “I came over to Europe, did a test and obviously they saw my potential and offered me the drive. I was delighted and obviously jumped at the chance.”

In any racing driver’s career, it is nice, as Hand tells us, that the M3 DTM was “easy to drive,” as it is a “brilliantly engineered car, and for me it was just another challenge and one I savoured.” 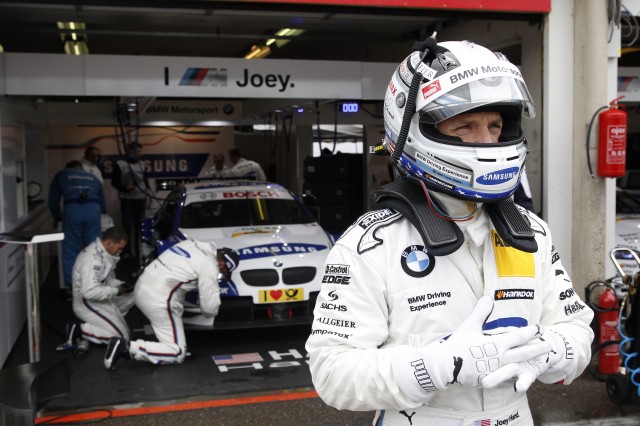 But he has had to work hard over the season to get accustomed to the M3, and says that he thinks he has mastered the V8 beast, with his now-consistent results showing the fruits of his labour. But just because one series like the ALMS is something he has been used to, he has had to learn a new racing style, and shows how he compares the DTM to the ALMS: “I had to get used to how you attack from the word go in qualifying and the race. In a 12-hour endurance race you do not do that or you wouldn’t last the race.

“I have also had to get used to the pit stops, the way we come into the pits and go out. Race strategy is also a lot different in a race that is an hour and a quarter long.”

He has also had to learn new tracks, but shows how much of a likeness there is between some of the tracks here in Europe and the ones he is used to racing in the USA: “Oschersleben, for instance, is like a go-kart track that I am used to racing on in the States and then you have Zandvoort which follows the topography and reminds me of a mixture of Road America, Road Atlanta and VIR (Virginia International Raceway). At the end of the day a track is something you have to learn and do this quickly to be able to make sure you get the best out of your car, so I cannot say there are that many differences in the tracks.”

Even though BMW Motorsport has really showed that with a blank sheet of paper, new regulations and a new direction with the DTM-Era that started this year, he said that the relationship that exists between all six drivers, both on and off the track, is a very healthy one: “We work as one big team under BMW Motorsport, even though there are three separate teams. I really like working with the other five drivers and think we all have good working relationships as well as being friends. Obviously it is a bit more serious for Bruno, as he is still in with a chance of the series, but this hasn’t meant we are enjoying what we are doing any less.”

With Hand’s participance in the series, alongside fellow drivers from across the pond, Robert Wickens and Bruno Spengler, he hopes that the profile of the series has been raised in the USA and Canada, and paves the way for future talent from across the Atlantic take the chance to do so, if they get the call: “Let’s hope the youngsters see this as an attractive proposition for their careers.” 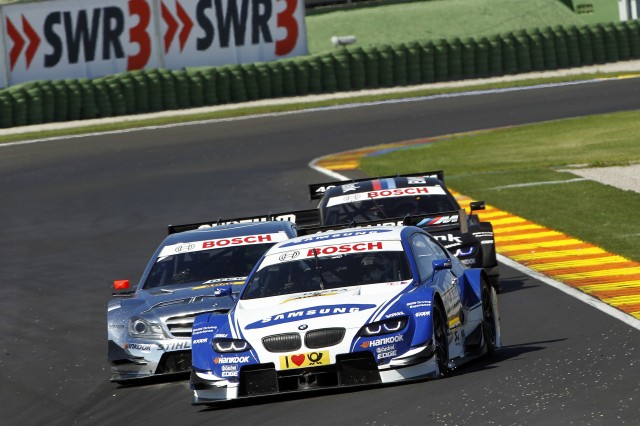 Now that Team MTEK joins the BMW stable for 2013, and help to provide a level playing field for Munich, Hand sees it as a great foundation for the years to come, especially as Audi and Mercedes have eight drivers, which stands them in good stead: “I think to most people, this seemed the natural progression and I am confident BMW will just go from strength to strength in the series.”

We also asked if he would be returning next year, but he said that the decision lies with Motorsport Director Jens Marquardt, who is the only one that can provide the answer, but it would be nice to see him compete again next year.

He is a credit to BMW, in the way that he is a prime Brand ambassador for them in North America, not just in sportscar racing, but has clearly shown that he, amongst many, can take on a new challenge and deliver consistent results, so we will have to wait and see if he is back behind the wheel in Europe once again next season.