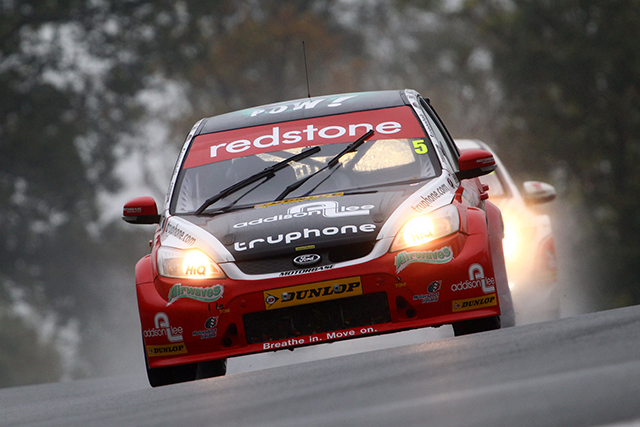 The Motorbase-run squad had closed the gap to leading outfit Pirtek Racing to just seven points following a maiden victory for Smith and a charge through the field to seventh from Mat Jackson. However, in race three, with Jackson leading and Smith set to pick up another strong points haul in fifth, a return of the throttle problem from Silverstone ended Jackson’s race prematurely.

It meant Andrew Jordan‘s fourth place finish was enough to bring home the title for Pirtek, with Redstone left to rue two mechanical failures in three races for their new NGTC Focus.

However, despite the disappointments, the team were upbeat following strong progress in 2013. Team Manager Oly Collins said: “A very mixed day today. I was absolutely over the moon for Aron to get the win in his first full season in BTCC was fantastic, it’s been coming all year and he thoroughly deserved it.

“We had a couple of issues with the new car which is to be expected at this stage. Everything we’ve done this year with that car helps us for next year. Liam had a solid couple of races to end his BTCC career as well, which was nice. I would also like to say a thank you to the whole team, sponsors and supporters for getting us to this stage. It looks good for next year if we can piece everything together.”

Having charged through the field from 17th to take the new car’s first win in race two at Silverstone, Jackson pulled a similar feat in race two at Brands, climbing to seventh from the back and securing pole position on the reversed grid for race three – but their luck ended there, and Jackson conceded it had been a tough weekend.

“It was looking like we had turned the weekend around with the reverse grid pole and the car was feeling great. We’ve had another learning weekend and unfortunately we’ve suffered another throttle failure which was a real shame as once again it has cost us another win.

“At the end of the day we’ve learnt more going forward to next season and it was mega for Aron and the team to get the win.”

Despite the team’s heartache, Smith was understandably jubilant after his first win.

“Unbelievable! That’s the only word I can think of to describe this weekend,” he said. “To come away with a win in my first year is just an unbelievable feeling. I always go better in the wet so once the rain came I knew I could really get my head down and go for it. The car’s been dynamite all weekend and all credit to the Motorbase guys once again for giving me such a fantastic first year.

“There were a few worrying moments when Shedden began closing in on me and I had to turn up the wick and go protect my lead. This meant we started pulling away again so I think I had everything under control.

“If someone would have told me that at the start of the season I wouldn’t have believed them! To finish up eighth in my first year is something really, really special and I’m very proud of what we achieved.”