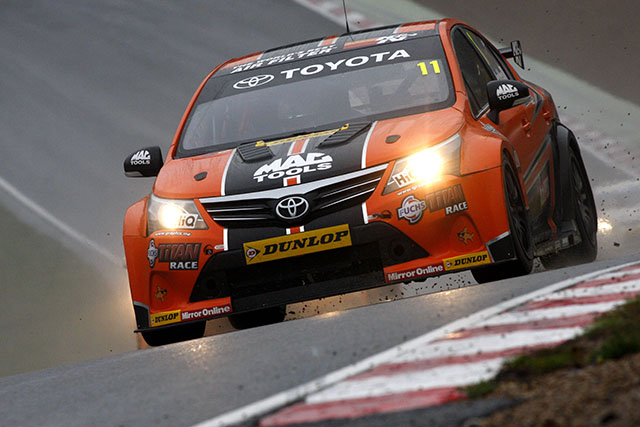 It is only his second season racing in the Dunlop MSA British Touring Car Championship but Frank Wrathall labelled his first win in the rain-soaked finale at Brands Hatch “a relief”.

Having told theCheckeredFlag.co.uk at Snetterton earlier this season, when he had taken his first career pole, he was determined to deliver the first modern-era win for a Toyota and the first of any kind for them since 1993, he did just that in race three on Sunday.

Starting from second, he pressured early leader Mat Jackson from the start – “the Toyota felt like it was on rails, absolutely mega” – and when the Ford pulled to one side with throttle problems, Wrathall was never headed, winning by nearly seven seconds ahead of a trio of Honda Civics led by newly-crowned 2012 champion Gordon Shedden.

The first corner was the turning point, he said, when after a poor start had dropped him behind Jason Plato, Wrathall simply drove around the MG on the outside of Paddock.

“I got too much wheelspin off the start and moved sideways instead of forward,” he explained. “That allowed Jason Plato to pass me on the inside, so I just stuck to the outside line through Paddock and the car felt great and I went straight back past him. It was at that point that I thought ‘we could be all right here’.

“Getting my first win is such a relief, and it’s great for the Dynojet team, to whom I owe everything. They deserve all the praise: they have done an incredible job and all day they have been improving the Toyota to the point where it was the best car out there. Everyone has worked so hard and we’ve had far too many disappointments this year, so this is a great end to the season.”

The Dynojet team were the first to enter a car in full-NGTC trim, in 2011, and Wrathall has been chipping away the achievements since – taking his first outright podiums and Independent class wins in his first season, before the maiden pole and victory in 2012.

“When Mat slowed down and I passed him for the lead all I could think was how much of the race was left, and here I was leading a touring car race for the first time,” said Wrathall. “I was also thinking about everybody in the team. I knew what I was doing and I was pretty comfortable with things, but I reckoned that everyone in the pit garage must have been beside themselves.”