He has spent the last few years driving one of the greatest cars in the British Touring Car Championship’s recent history. Now, Richard Hawken wants to try his hand in a modern-day machine.

The 40-year-old has driven an ex-David Leslie Nissan Primera to the 2010 and 2011 BRSCC SuperTouring Car Trophy, as well as the Class B Euro Saloons Championship.

Notable performances include wrapping up the 2010 title despite a head gasket failure and an unorthodox water-supplying strategy; a lights-to-flag win at Brands Hatch against more powerful cars in front of his sponsors in 2011, and the 2012 Silverstone Classic where he shared the podium with BTCC driver Frank Wrathall.

The Primera, the car Laurent Aiello drove to the 1999 BTCC crown, is widely regarded as the pinnacle for the championship’s highly-successful and ultra-competitive Super Touring era.

It’s a car which Hawken has been quick to master – but club-level success is not in his interest any more.

“It is time for the team and I to move to the BTCC,” he said. “It’s something we have been working towards for a number of years but first needed to prove we could succeed there. Three club championships should help for sure.

“Without a doubt it’s going to be a step up for the team and I but we are prepared, we are ready.” 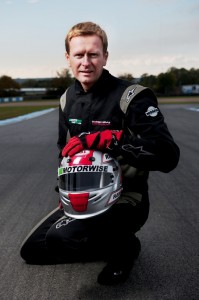 Hawken’s sights are firmly on the BTCC with Team-HARD.

The championship’s seen a lot of drivers come and go over the past decade, as inexperience and a lack of funding takes its toll.

However, Hawken’s knowledge of front-wheel drive cars – not to mention his time racing cars of any kind – means he is confident he would be there to stay.

“With 20 years of successful racing cars under my belt and 10 running front wheel drive touring cars I feel I have got what it takes to make an impression in the BTCC,” he said. “I have been wanting to race the BTCC for years, since my late father used to take me along to our local circuit Thruxton to watch my heroes battle it out in big saloons.”

The wait may be over as early as 2013. Hawken has been involved in talks with Tony Gilham’s Team-HARD. Squad – which recently announced it will run NGTC VW CCs next season alongside a pair of NGTC Vauxhall Insignias and its existing S2000 Honda Civic.

Said Gilham: “We met him a couple months back and have been in discussion for a while now. He has been a guest of ours at Silverstone and enjoyed being involved with the team.

“He likes our drive, determination and our future plans so we are looking to work together for something for next season.”

Beyond the Kent-based team, he says tentative negotiations began with Christian Dick at Speedworks and Marvin Humphries at Techspeed. This time last year Derek Palmer of Promotorsport and Hawken were in talks to put a turbo Chevrolet Cruze on the grid, but they sold them before they could amass the full budget.

However, he has his heart set on Gilham’s team.

“I am going to be giving it my all next season to secure a drive with a decent team, hopefully the ever popular and successful Team-HARD.,” he said.

“My plans are to drive with Team-Hard. next year, ideally in the Honda but of course I would consider any car, including the Insignia. I am hoping to test with Team Hard soon in either or both cars.

“I think the Passat will be a very decent car indeed. Despite its size, out of the box it ticks a number of boxes as a standard car. If I can raise a budget to get into NGTC spec cars then I would be crazy not to I think.”

Racing in the BTCC would be more than the culmination of a dream for the Surrey racer; it would mark the result of a lifetime’s work and effort, and pay tribute to the influence of his late father.

“He [Hawken Snr.] died sadly before I got to race my first ever lap,” he says, “but I am sure he would have been so proud for me to reach this level.

“I can remember saying to him in my early teens “daddy I want to be a touring car driver”, so for me to achieve that would be homage to him and also thanks for getting me involved in such a fantastic sport.

“In the last 2-3 years it has reached a level where I now must give everything to achieve my goal. My desire has become an obsession, a drug, one where the only cure is to succeed.”