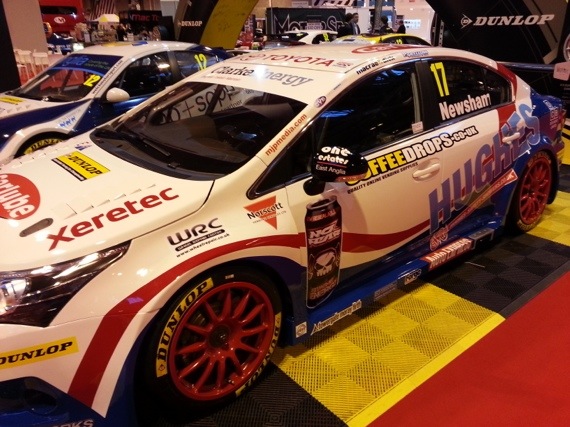 The Scot won twice in 2012 driving an S2000 Vauxhall Vectra for ES Racing but will race NGTC machinery this year as he replaces Tony Hughes in Christian Dick’s team.

And Newsham, whose Toyota Avensis was on display at the Autosport International Show, is confident driving the new-spec car will allow him to continue fighting at the front on a regular basis.

“I’m absolutely convinced we can be winning races and challenging for the Independents’ title,” he told theCheckeredFlag.co.uk. “[Stepping up to NGTC machinery is] absolutely crucial really. The S2000 is obviously a different championship this year so for me there was no point.

“Last year I think we showed glimpses of what the car could do, I had a couple of wins, and podiums, but there were times when just couldn’t compete.

“I have to be in an NGTC car if I’m going to do well this year and I think Ive chosen a really good team to do that with. Winning the Independents Championship has to be the aim. We have to be winning. We all want to win; the team wants to win as much as I do. So we’ve all got to work to make that possible and you need a bit of luck along the way but I don’t see why this car shouldn’t be as quick as any NGTC car – and that includes Honda.”

Frank Wrathall proved the Avensis can be a race-winner when his DynoJet team won at the final round last year but mistakes and misfortune blighted Speedworks, the second of two independent Toyota teams on the grid, in their efforts to challenge at the front.

However, Newsham believes this year will be a different story, as the team will be able to hit the ground running with development and testing planned – possibly even overseas.

“Tony’s put a chunk of money behind and with my success last year we’ve also gained quite a lot of sponsors as well,” he explained. “So I’ve done quite well and the support has made it all happen for us.

“It’s not just a cobbled together budget to pull us through; it’s a proper budget to let us go and do it competitively.”

Hughes, who retired at the end of 2012, is playing a big behind-the-scenes role for Speedworks in 2013, helping fund Newsham’s drive and pushing for another fan-favourite, Paul O’Neill to be in the second seat, vacated by Adam Morgan.

He said an announcement was not far off, and that his efforts concentrated on getting a package sorted for O’Neill to complete what he believes would be a “dream team” – something Newsham agrees with.

“Ideally I’d want someone experienced and quick so we can both learn off each other, and you’ve got a good benchmark there and a good gauge of where the team’s performing. So I’d love to have Paul on board.

“Whether that’s going to happen or not it’s up to those guys to get a package together to make it work. I think Tony’s prepared to help, but they also need some other sponsors to come on board to make that happen. I’m sure I’ll have a teammate, but at this time I don’t know [who it will be].”

By Samuel Gill
1 Mins read
Bobby Thompson will not be taking any of the final seats available on the 2021 British Touring Car Championship grid and will sit out the season due to budget issues, it has been confirmed.
BTCC

By Samuel Gill
1 Mins read
‘Flash’ is back! Three-time BTCC champion Gordon Shedden will return to the championship after a three-year hiatus and will be back as part of Team Dynamics line-up.
BTCC

By Samuel Gill
1 Mins read
Title challenger, Dan Cammish will not take his place in Team Dynamics’ line-up for the 2021 British Touring Car Championship season after parting ways with the team earlier this week.