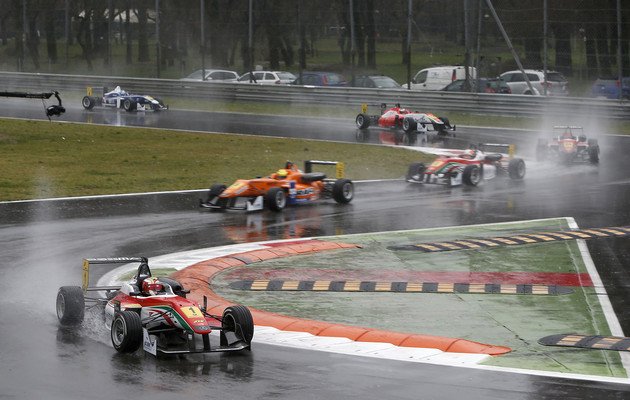 The final race of the first race weekend for the FIA F3 European Championship came to an abrupt end, as Raffaele Marciello took his second win of the weekend, as the Italian extended his lead over Carlin’s Harry Tincknell to 31 and a half points going into the next round at Silverstone on the 13th and 14th of April.

The race once again started under the guide of the Safety Car, as the drivers were released after just three laps, with Marciello again pulling away from Wehrlein from the very beginning, as Prema Powerteam‘s Alex Lynn also found himself falling back under the heavy rainfall.

The midfield seemed to also provide the bulk of the action, with collisions and incidents aplomb. ma-con Motorsport‘s Sven Muller and kfzteile24 Mücke Motorsport‘s Roy Nissany collided, promptly ending the Israeli driver’s race. Muller then had to pit after suffering another incident with Carlin’s Nicholas Latifi, with Mitchell Gilbert, Andre Rudersdorf, Lucas Wolf and Dennis van de Laar also being casualties of the weather and track conditions.

The clerk of the course stopped the race on Lap 9, which meant that only half points were awards, and the drivers on the podium were followed by Lucas Auer, Luis Felipe Derani, Tincknell, William Buller, Eddie Cheever, Jordan King and Tom Blomqvist.

Marciello ended the race on a high, and found that Wehrlein was getting quicker in the worsening conditions, but understood that making one mistake could have been critical: “I have tried to pull a gap, which wasn’t that easy. However, my car was better than in the morning and I was able to get a little advantage as a result.”

The departing Wehrlein was pretty happy with his final outing in Formula 3, having secured 1 win and two podiums, but had hoped for a victory to say his farewell to the single-seater category, before his focus turns to the DTM: “It wasn’t easy, because we could hardly see a thing due to the water. I also think that stopping the race in these conditions was the right decision, because the spray was even more extreme in the midfield.”

So with the season underway, as the new era of Formula 3 moves forward, the teams and drivers venture to Northamptonshire for the second round of the series, with Marciello leading the way forward in a dominant showing so far, but will anyone step up to the plate, and challenge the Italian for the title?