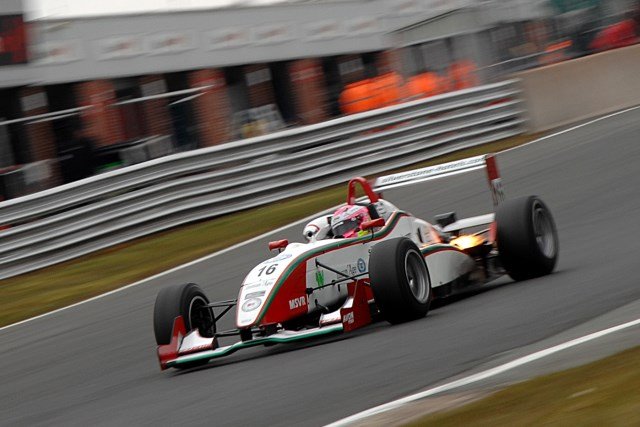 Alice Powell put on an exhibition-like performance to win the opening race of the F3 Cup at Oulton Park, winning by a gap of over 18 seconds.

Having taken pole position by a margin of 1.3s earlier in the morning, this proved an omen of things to come as the former BARC Formula Renault champion pulled away throughout the 13-lap encounter.

Powell lead the way with a perfect getaway when the lights went out, leading fellow front row starter James Cross around Old Hall and Cascades, while behind them the hastily-repaired Dallara of Henry Chart started to slip back with the machine still seeming sick, retiring a lap later.

The leader’s race was then helped when Cross suddenly slowed at Hyslops, the AW Tracksport man retiring from second place as Powell lead Alex Craven by a comfortable gap of 2.5s.

That became over six seconds by the end of lap three, and the margin continued to grow by at least a second a lap as Craven pulled away from a three-car dice for third between Mark Harrison, Tristan Cliffe and Robbie Watts.

The trio ran in tandem for most of the race covered by around two seconds, before Cliffe started to come under pressure towards the race’s end from the Raw Power Motorsport car of Watts.

Powell meanwhile had begun lapping the backmarkers – including team-mate Stuart Wiltshire – and cruised home to take the win by a crushing 18.101s over Craven, with Harrison a distant third almost 30 seconds back from the winner.

“It was a good race”, said Mark Bailey Racing’s Powell. “I pushed quite hard early on and then when I built up a gap I could just try and save the tyres for the next race.”

Watts tried to force a mistake out of Cliffe in the final three laps but the Omicron Motorsport driver defended his place grimly to seal fourth, Chris Needham and Gino Ussi next up, the latter having overtaken the Trophy class winner Dave Karaskas.

Sims set for F3 Cup outing to qualify for Macau

By Paul Hensby
1 Mins read
Alexander Sims is set to compete in the F3 Cup event at Snetterton in order to qualify for the end of year Macau Grand Prix.