Rockenfeller: “It’s about getting a clean first lap.” 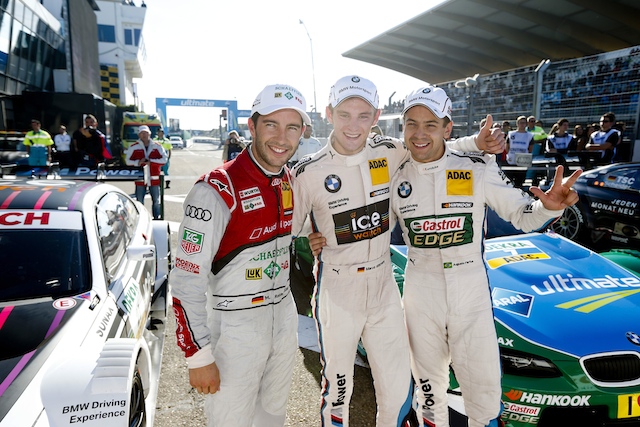 He may be 33 points in the lead in the hunt for the title against Augusto Farfus, but Mike Rockenfeller is hopeful of a clean getaway at the beginning of the race today at Circuit Park Zandvoort, as a gap of over 25 points over his Brazilian Rival will assure the German driver of his first DTM title with Team Phoenix.

But “Rocky,” like every driver this weekend, has said that it is all about the tyres: “I think we will have to wait and see, as it is about the pace and how long you can run the options for,” he explained to theCheckeredFlag.co.uk this morning.

He was very much aware of the threat that BMW do pose with the speed they have already shown through Farfus and maiden pole sitter Marco Wittman, even though they are on the standard tyres, with “Rocky” going on the option tyre: “I think that yesterday, the pace of the BMWs was no good for us and if they continue, we will have no chance today.”

On discussing potential overtaking possibilities, even without DRS, the famed “Tarzanbocht” corner is just one of the chances drivers have to pass around the 4.307km track. He said that Turns 9 and 10 at “Scheivlak”, which are incredibly fast sweeping turns having potential as passing places, as well as the “S-Bocht” chicane giving drivers a chance at high speed to push the limit of car and driver to get ahead.

BMW Motorsport has shown their strengths so far, but Rocky has a team behind him to give him that chance to secure the drivers’ title this weekend and hopefully give Audi Sport the chance of taking the lead in the hunt for the Manufacturers’ Championship heading into Hockenheim. The race is on by the sea, but who will be king of the dunes after the race?