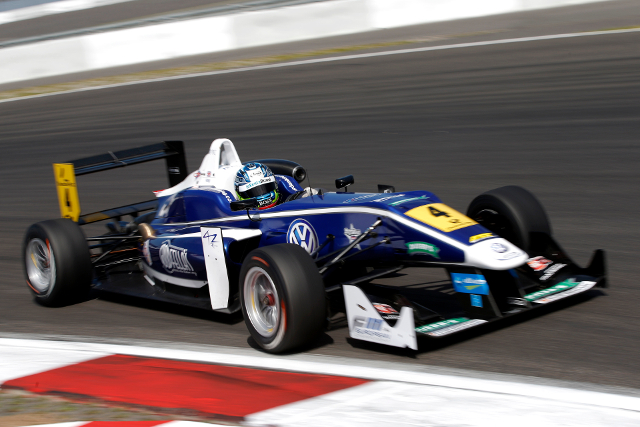 After an intense pre-season, Jordan King is fighting fit ahead of the 2014 FIA Formula 3 European Championship.

After an impressive debut season with Carlin last year, in which the Englishman claimed top honours in British F3 and an impressive 6th in the FIA Formula 3 European Championship, King took time to attend a comprehensive pre-season training and preparation camp with former F1 star, Mark Webber.

The two-day programme took place at the Porsche Human Performance Centre at Silverstone, in the presence of the German sportscar manufacturer’s new endurance racing recruit, Webber.

Speaking of the event, The 20-year-old British Racing Drivers’ Club (BRDC) SuperStar and MSA Team UK protégé said it was an “immensely positive and worthwhile experience.

“On the first day, we focused on the physical fitness side, and then on day two, we delved deeper into the theory behind it and how it works, which was really interesting. We examined the effects on the body of sleep patterns and travel; Mark revealed that he spent a total of 36 days flying last year, which is more than a month in the air!”

2014 see’s King launch into an all-out assault for the FIA F3 European Championship with Carlin once again. The successful combination will be going up against the likes of Felix Rosenqvist and Max Verstappen for title glory.

BRDC SuperStars Director and 1992 BTCC champion, Tim Harvey, believes King has a real shot at the title this season. “In his first season in F3, his results kept getting better and better, he applied himself fantastically and to win the British title and finish inside the top five in Macau was hugely impressive.

“If last year was a learning curve for Jordan, though, this year is all about targeting the championship – and he will certainly start out as one of the favourites.”

The FIA European Formula 3 Championship gets underway at Silverstone on the 19th & 20th April.

GB3 race-winner Grundtvig stays on at Fortec for 2022

By Michael Callander
1 Mins read
Two-time GB3 race-winner Mikkel Grundtvig will stay with Fortec Motorsports for the 2022 season. His two team-mates are yet to be announced.
GB3

Callum Voisin: "No reason we can't be up there" in GB3

By Michael Callander
7 Mins read
Callum Voisin was the first driver to be announced for the 2022 GB3 Championship season. TCF caught up with him just after he was announced at Carlin.
GB3

By Michael Callander
2 Mins read
JHR Developments will return to the GB3 grid for a full season in 2022. They made one of the least surprising driver announcements of the off-season on Wednesday by retaining British F4 champion Matthew Rees.