The M4 DTM Hits The Spotlight 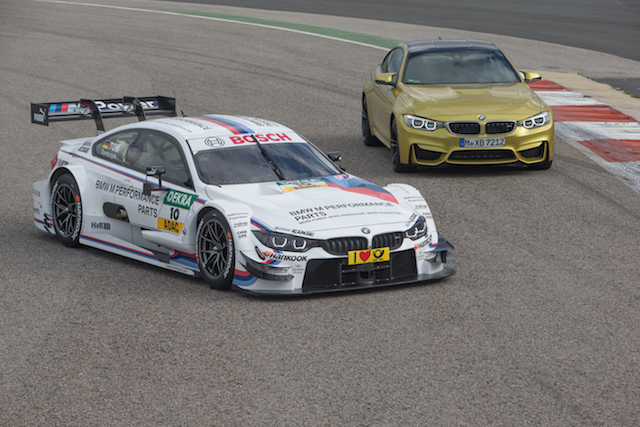 As today signified the homologation due date for all three cars that will be racing over 10 weekends this season in the DTM, BMW Motorsport unveiled the new M4 DTM, which replaces the outgoing M3 that helped Bruno Spengler, Team Schnitzer and BMW to secure a clean sweep back in 2012. A pretty remarkable feat after 20 years away from the series, which wrote a new chapter in the DTM’s colourful history.

Both official tests at the Hungaroring and Hockenheim will give Munich the chance to tune the finer details ahead of the car’s debut at the famed German circuit in the first week of May. All eight cars will also be unveiled at BMW Welt on April 29th, so as the fans can again see the spectacle of a special reveal.

The first M4 road car recently came off the line, with both plants at Regensburg and Dingolfing being involved with the new race car in its development, which from a logistical perspective made it perfect, as the BMW Motorsport engineers were hard at work on this year’s challenger.

Motorsport Director Jens Marquardt said that the challenge of bringing the M4 DTM to the track has been a “big challenge,” especially with the characteristics of aerodynamics playing a key part of the race car’s setup: “Even the slightest detail can make the difference between success and failure. And this attention to detail shown by our engineers is apparent at first glance.

“Like its production counterpart, it looks fantastic and it also made a positive first impression at our tests. Unlike when we were developing the BMW M3 DTM for our return to the DTM in 2012, this time around we were able to call upon the wealth of experience gained over the last two seasons. Despite this, we still have a long road ahead of us – the opposition have continued to develop their cars in the meantime.”

The road ahead for BMW is long and arduous, but rest assured that they will look to fight from the onset, as we await for Audi Sport to reveal the RS5 next week at the Geneva Motor Show. The clock is counting as we await the sounds of V8s once again.

Former champion Rast returns to DTM grid with ABT Sportsline

By Vince Pettit
2 Mins read
After a year away racing in Formula E, three-time DTM champion René Rast is back on the grid with ABT Sportsline.
DTMIndyCar

By Justin Nguyen
2 Mins read
After being involved in a scary handcycling accident that left him hospitalised in June 2020, Alex Zanardi has been released and will continue his recuperation at home.
DTMFormula 1

By Paul Hensby
1 Mins read
Alexander Albon has downplayed the stories that being team-mate to Max Verstappen puts too much pressure on a driver, believing it is the pressure from within that is the bigger issue.