Speed is a word uttered more than most when it comes to Thruxton, the third battling ground for the 2014 British Touring Car Championship this weekend as the tightly-fought contest sees the top four contenders separated by just three points.

The 2.36-mile Hampshire circuit is a personal favourite with many drivers in the paddock, the spectacular high-speed venue tagged with many cliches thanks to being the fastest on the calendar.

Donington produced fireworks a plenty, Jason Plato the biggest gainer as a pole position and maiden win of his 2014 campaign launched him into a joint series lead with double Brands Hatch winner, Andrew Jordan, the pair therefore sharing 36kg of penalty ballast this weekend.

Jordan also admitted to The Checkered Flag that Thruxton is a circuit he enjoys, having scored two spectacular pole positions in the previous two visits to the flowing strip of tarmac, but not yet tasting success on the Sundays here – robbed by a puncture on the last lap of the opening encounter here 12 months ago.

“I love it, although I’ve been on pole the last two years and still haven’t won”, the reigning champion told TCF. “I came so close last year to winning it, but we should be very strong and I can’t wait to get there already.” 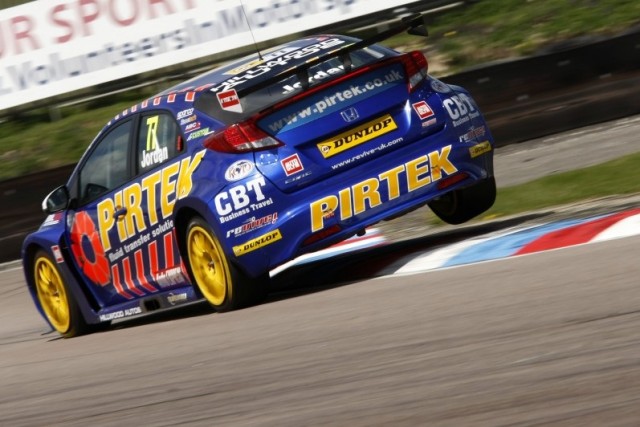 His Pirtek Racing team-mate Martin Depper brought up another more ballsy factor at Donington to The Checkered Flag about this weekend’s coming visit, saying: “It’ll be all about being brave, and that’s how you go quicker in these cars particularly under braking; I’ve been trying to work on my bravery a bit more lately!”

Much of the second round at Donington was dominated by the MG KX Clubcard Fuel Save BTCC Team, with Plato and Sam Tordoff sharing the wins in the day’s opening two races in a pair of one-two finishes, flaunting their newly-refined wet weather pace.

Tordoff added a second win to his BTCC portfolio at the Leicester venue, and believes that the MGs will steadily build up their pace at Thruxton this weekend at a track he feels will suit Honda, who have won seven out of the last nine races at this track in the hands of Matt Neal and Gordon Shedden.

“It’s one of those tracks that you always feel you want to gain a little bit more time to really find the limit, but when you do then you can really start to scare yourself!” Tordoff told The Checkered Flag.

Shedden incidentally enters Thruxton off what he felt was one of the best BTCC races he’s been a part of, snatching a last-corner win from Colin Turkington at Donington to enter just a point behind series leaders Jordan and Plato.

The Scot has won at Thruxton five times in his career with Honda and Dynamics – a team who famously won all three encounters with Dan Eaves in 2005 – while Neal has done so on four occasions including a double last year, the latter of the Yuasa Racing pairing somewhat an untold supremo when it comes to Thruxton tyre preservation.

BMR Racing have reason to be full of optimism, Aron Smith and Alain Menu hoping to back up the strong performance of their podium-finishing Volkswagen CC machine’s 2013 visit to the Hampshire venue, Tom Onslow-Cole having enjoyed the car’s best BTCC outing 12 months ago to reach the rostrum.

Menu’s BTCC return has seen him in the thick of more than enough action he would have initially scripted, however, the Swiss driver’s recovery drivers from incidents in the opening pair of rounds now see him topping the Jack Sears Trophy, having improved 42 places from his starting positions over the six combined races to head the excelling Rob Collard by eight spots.

Robb Holland and James Cole face an early race themselves as their Rotek Racing and United Autosports squads continue respective rebuilds after the pair’s heavy incident at Donington Park during race two. Cole’s Toyota is close to being ready in the words of the man himself, while Holland’s Audi S3 remains an uncertainty.

Like Jordan, Plato was also victim to a puncture while leading at Thruxton last year, the abrasive, high-speed nature of the circuit often producing a late-race drama associated with a tarnished left-front tyre pitching a car off the road when the rubber has cried out too much.

Plato and Jordan were robbed by punctures in 2013 (Photo: btcc.net)

Fabrizio Giovanardi lost a victory on the final lap in 2008 when driving for Vauxhall – Tom Chilton similarly the year before – while 2010 saw many similar dramas occur for drivers, Plato’s 2012 qualifying off probably the most dramatic example as his MG had to be recovered from a ditch deep on the outside of Church corner.

Drivers have to therefore find the right balance between pushing and preserving their rubber, Dunlop once again introducing their own Thruxton-specific compound for this weekend.

The spectacular sight of kerb-hopping will come with the consequences if applied too frequently during the trio of races, drivers therefore required to focus on set-up and their own use of the track more so than many events on the calendar.