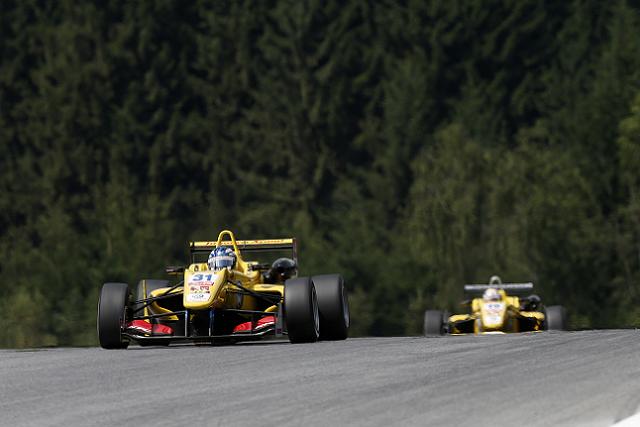 Tom Blomqvist took his fourth win of the 2014 FIA European Formula 3 Championship season in race one at the Red Bull Ring in Austria.

The Briton, driving for the Jagonya Ayam with Carlin team, held off the challenge of his Italian team-mate Antonio Giovinazzi, but Van Amersfoort Racing’s Max Verstappen was handed a post-race five second penalty that saw him drop from third to fifth and hand his podium place to Jake Dennis of Carlin.

Blomqvist controlled the race throughout, only coming under attack from Giovinazzi when he made a small mistake on the ninth lap, but the Briton repelled the Italian and went onto win by 4.089s.

It was a crazy start to the race for Verstappen after colliding with Championship leader Esteban Ocon at the first corner that saw the Prema Powerteam driver spin to the back of the field. Stewards deemed that no penalty should be applied for that incident. The penalty applied to the Dutchman was for being deemed to have overtaken Ocon’s Prema team-mate Antonio Fuoco while off the track at turn two, thus gaining an illegal advantage.

Dennis and Felix Rosenqvist of Mucke Motorsport were embroiled in an almost race long battle for what would ultimately become third place, with the Briton making the decisive move on the Swede with seven laps to go.

Fuoco would end up sixth, holding off Gustavo Menezes of Van Amersfoort Racing and Jordan King of Carlin for most of the race, with Menezes finishing on the Ferrari Driver Academy driver’s tail, while King lost time on the final lap and dropped to ninth behind Prema Powerteam’s Dennis van de Laar.

Lucas Auer took the final point for Mucke Motorsport after taking a five-place grid penalty from his Moscow Raceway clash with King. Nicholas Latifi was running in the top ten early in the race before a spin, before ultimately clashing with Van Amersfoort Racing’s Jules Szymkowiak that resulted in both drivers retiring. Latifi will go into tomorrow’s second race of the weekend with a five-place grid penalty as a result of the incident.

Championship leader Ocon could only recover to thirteenth after his first lap spin, but will be buoyed by the penalty handed to Verstappen as it lessens the point’s gain the Dutchman would have received.