Jackson ‘Sure’ Airwaves Can Win After Snetterton

Mat Jackson says that Airwaves Racing are now very capable of earning their eagerly-awaited first win of the 2014 Dunlop MSA British Touring Car Championship season, after narrowly missing out in a tense final race at Snetterton.

The Ford Focus ST driver put eventual reverse-grid race winner Aron Smith under intense pressure for much of the final Sunday encounter in Norfolk, coming just short behind the BMR Racing driver for what is Jackson’s third podium of 2014.

Jackson felt sure that he and team-mate Fabrizio Giovanardi would have been uncatchable had the reverse grid draw swung one position in favour of the Airwaves team, Jackson having bettered the Volkswagen of Smith in race two with sixth position following an eighth place finish in the opening contest of the day.

“It was close”, Jackson commented to The Checkered Flag afterwards. “Obviously had the reverse grid swung the other way then it would have been a one-two for Airwaves and we’d surely have won it. But it’s ifs, buts and maybes that don’t win.

Ultimately, Jackson added that the Ford was simply not a match for Smith’s Volkswagen CC on the Snetterton 300 circuit’s long straights, the BMR machines topping the speed traps for much of the weekend.

“The car was quick, and quicker through the corners, but we were suffering in a straight line”, Jackson commented, as boost levels proved a talking point among many in the paddock. 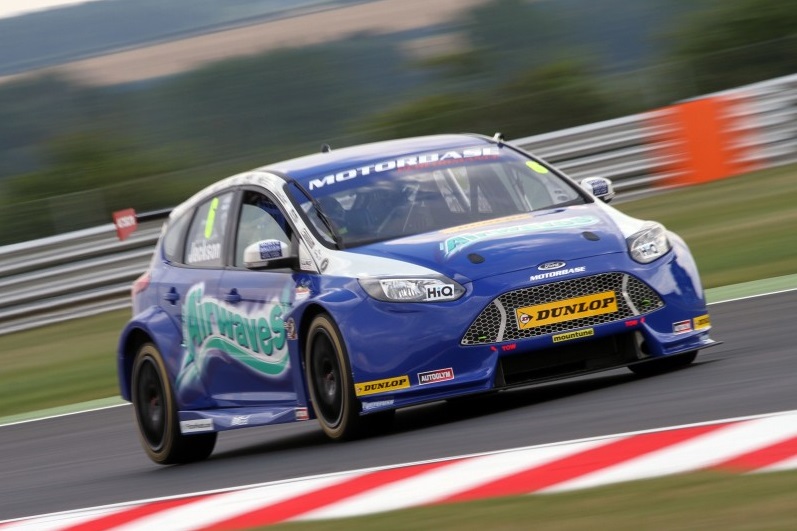 “It’s frustrating, but you never know – next time it might turn in our favour so that’s what we have got to hope for.”

The pace of the Ford showed further promise and improvement, Jackson adding: “We’re making big progress with the car and it’s moving in the right direction. So we’re in good shape, and obviously Knockhill is a very different circuit to here so we’ll wait and see.

“We need to deliver and find that little extra bit that will give us that win.”

Like Smith, Jackson agreed that the pair’s final race dice set a positive example of how drivers should settle their battle for victory, the duo having previously come to blows at Brands Hatch in the season opening meeting of 2014.

“You’ve got to race as you want to be raced”, added the 2008 BTCC runner-up on his duel with Smith at Snetterton. “Not everybody does! But that’s racing.

“There’s nothing more infuriating than being fired off, because that shouldn’t be entertained in an international championship. I wouldn’t want to race against that, and you’d like to think those around you feel the same way.”

Another strong weekend for the Airwaves Racing man moves him closer to the top five in the championship standings, now 14 adrift of fifth-placed Rob Collard as the series next heads to Knockhill for rounds 19, 20 and 21 of the season on 23/24 August.