Local hero Gordon Shedden says he feels the Honda Yuasa Racing team have a package very capable of victory in front of his home supporters as the Dunlop MSA British Touring Car Championship heads to Knockhill in Scotland for the seventh meeting of the 2014 season.

The 2012 BTCC champion currently lies second in the points heading to the Fife circuit on 23/24 August, 23 points behind West Surrey Racing‘s Colin Turkington after a Snetterton visit that he felt was more a damage limitation exercise afterwards.

The Scot is a three-time winner at Knockhill, and is already relishing his return to one of the most popular circuits on the current BTCC calendar in front of the fanatical supporters he feels will add an extra slice of determination to his driving.

“It’s the one time each year that I get the opportunity to race in front of my home crowd, and I’d be lying if I said that didn’t make a difference”, says Shedden.

“Scottish fans love their motorsport, and touring car racing has been a big part of that in the country over the decades.

“The atmosphere around the circuit is second-to-none. The crowds get so close to the action they can almost touch the cars as they speed around the lap, which is just incredible. Their support does give you an extra spring in your step and is sometimes capable of making extraordinary things happen.” 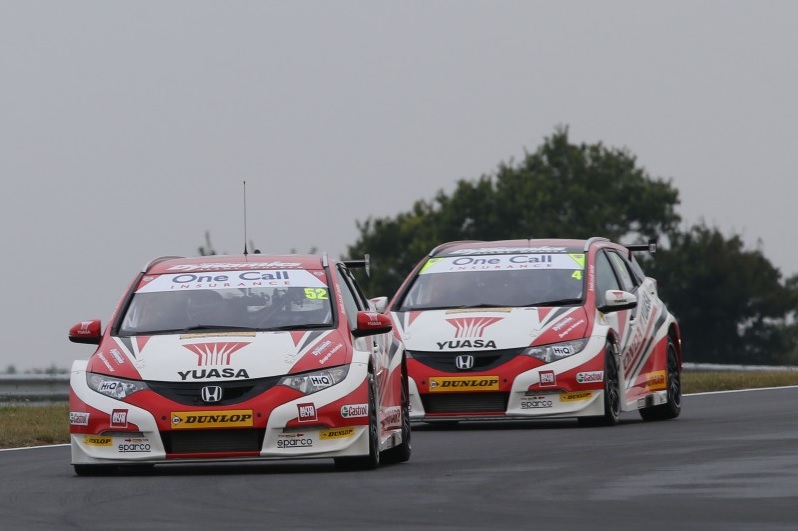 Shedden says Honda will be strong in Scotland (Photo: btcc.net)

Shedden deciphered the many differences Knockhill poses compared to the power-friendly Snetterton circuit visited at the start of the month – the tight, flowing and undulating nature of the Scottish 1.2-mile venue one which the Honda driver says takes commitment to be quick around.

The kerb-hopping nature of the track’s chicanes is a spectacular image for the onlooking fans every season at Knockhill, and requires a stable chassis as well as a committed driver behind the wheel. Shedden admits that the Civic Tourer will be very planted to the Fife circuit, and expects a strong weekend in his bid to close on the championship lead.

He added: “Knockhill couldn’t be more different to Snetterton in terms of the type of circuit that it is; it’s an absolute rollercoaster ride that goes up-and-down and sends cars airborne on two wheels over the kerbs. That requires massive commitment and means you can’t relax for even a moment, which is what generates such exciting racing.

“We are hopeful of being more competitive than we were at Snetterton, and the Civic Tourer’s excellent brakes and high-speed stability will certainly play a role in that. It will be interesting to see how it all stacks up. The target is a big points haul, and I’m definitely going there with my eyes on the prize.”

Shedden will also be one of five Scottish drivers who will cross the Forth Road Bridge on 21 August in their BTCC cars to mark the bridge’s 50th Anniversary ahead of the Knockhill visit, Dave Newsham, Glynn Geddie and Aiden Moffat joining the Honda man while double BTCC Champion, John Cleland, will take the wheel of an iconic car formerly driven by fellow Scottish motorsport legend, Jim Clark.

It will also celebrate the Knockhill 40th Anniversary as well as 50 years since late Formula 1 legend Clark won the BTCC title himself back in 1964, and a total of six famous machines formerly raced by the man himself will be present, including two Formula One and Tasmin Championship single seaters, a pair of iconic Lotus Cortinas and his first race car, a DKW.

Cleland enthused: “When they asked me if I would drive a Clark car, I jumped at the chance; as Jim was a real racing hero of mine. He was such a gent and legend of the racing world, and came from only a few miles from where I live in the Borders.”