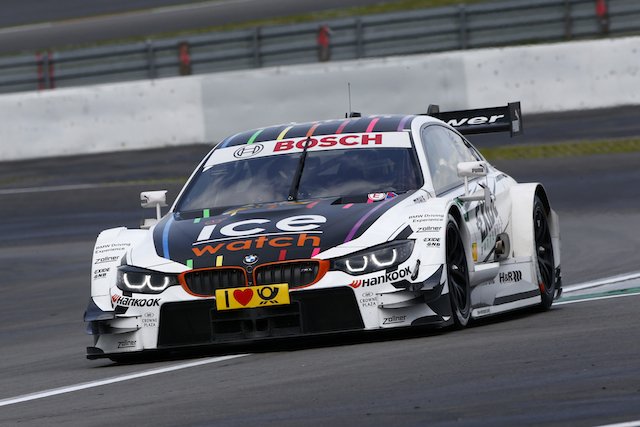 49 laps this afternoon at the 3.693-km Nürburgring circuit saw Marco Wittmann take another victory in the DTM, as the Team RMG driver is getting ever nearer to succeeding Audi Sport’s outgoing champion Mike Rockenfeller and taking the #1 Plate back to BMW for next year.

The 23-year-old, who now leads the standings by 64 points, kept his lead going into turn 1 ahead of Rockenfeller, who ended up second, with Audi Sport’s Edoardo Mortara rounding out the podium in what was an action-packed affair in dry conditions.

However, the initial stages of the race saw four cars from Ingolstadt retire by lap 11, as Mattias Ekström and Timo Glock made contact in the early stages, forcing the Swede to retire on Lap 4. Miguel Molina was sandwiched between Timo Scheider and Jamie Green into Turn 1 on the very first lap, suffering a right rear puncture.

Scheider was also forced to retire a lap later after Ekström, as he was hit from behind by Robert Wickens on Lap 8, which put the two-time champion into the side of fellow Audi stablemate Nico Müller, with both Audi drivers begin forced to retire due to bodywork and steering damage respectively, as a result of the accident.

Paul Di Resta and Daniel Juncadella capitalized on their strong qualifying performance, ending up as the highest-placed Stuttgart drivers, with the winner from Oschersleben, Christian Vietoris, rounding out the top six.

Maxime Martin finished seventh, ahead of 2011 Champion Martin Tomczyk, who fought back from the lower end of the grid, as the pair of BMW drivers made a good call in terms of when to put on the Hankook option tyres.

Even with his incident with Scheider, Wickens nursed his car back to 9th place, ahead of Pascal Wehrlein, which saw five of Mercedes-Benz’s driver finish in the points for the first time this year.

The gaps were very close all the way down the field, as Adrien Tambay and Bruno Spengler, who was the race winner in 2012, finished just seconds behind Wehrlein. António Félix da Costa ended up thirteenth, ahead of Joey Hand, who was handed a thirty-second time penalty after the race had ended.

The American was battling with the youngster, with both drivers side by side on lap 25 in the pit lane, as both exited pit lane at the same time, but Hand was deemed to have exited his pit box in the incorrect fashion.

Jamie Green completed the 49-lap race in 14th, but had been in his fair share of the battles. Gary Paffett was showing more promise in his EURONICS C-Class Coupé, placing within the top ten during the pit-stop phase of the race, but would finish behind his former teammate.

Timo Glock and Vitaly Petrov completed the finishers, as both had suffered dramas of their own, with the Russian being the only driver lapped during the race itself.

There is now a month’s hiatus, as the drivers will head to Lausitzring, with Wittmann firmly in charge, as both Mortara and Esktröm having a mathematical chance of closing the cap with 75 points on offer. However, as Wittmann seems unstoppable at present, it will take somewhat of a miracle for something to change the pecking order that is firmly established.

We could see another new champion-elect crowned next time out, but the DTM will continue its action-packed affair on race tracks on home soil once again.