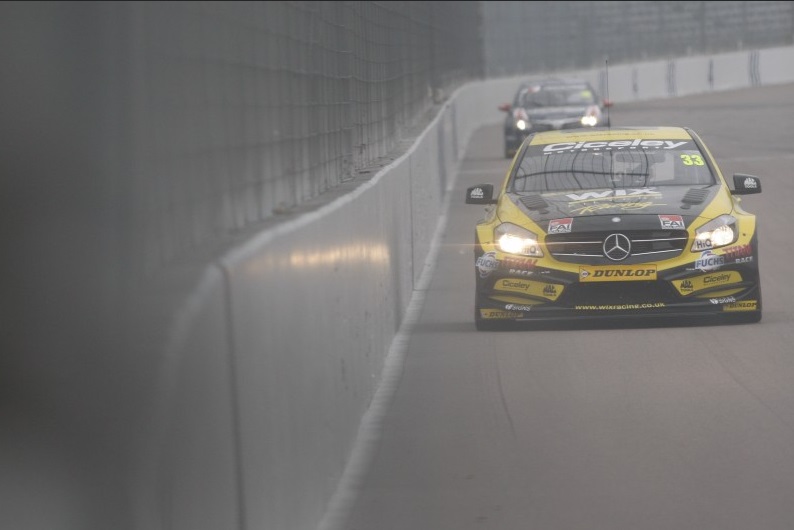 After qualifying sixth on the grid for the eighth British Touring Car Championship meeting of the 2014 season at Rockingham, Adam Morgan said afterwards he is improving his qualifying performances with the new Mercedes A-Class.

The Ciceley Racing man shone brightly through the mists of Saturday’s action, qualifying sixth on the grid having remained consistently well in the top 10 and continuing to improve as the day went on at the Corby circuit.

The youngster – now in his third year of BTCC – admitted to TCF afterwards that qualifying has been one of the key factors of his otherwise solid season that he would like to improve, Saturday’s sixth place at Rockingham being his best starting spot of 2014.

“It’s been really good so far, starting well with P3 in first practice and then P8 in free practice two which was positive”, Morgan told TCF afterwards.

“Qualifying has been my downfall this season really, I don’t like qualifying as much. So to come out of it with P6, I was pretty happy with that.

“It’s the first time I think that I’ve gone quicker on my second set of tyres i think. So I think that I’m getting better at it; but for qualifying, I think it’s one of those situations where you can put a lap together and go a bit quicker, but it’s that extra tenth or two that everybody else can seem to find.

“I’m a lot better in the races. I’m up there at the right end of the grid, so I’m really looking forward to it.”

Saturday was also scene to a covering of fog which made the morning session very difficult for the drivers, although Sunday’s weather forecast reads much more pleasant for the trio of Rockingham races.

“It’s been fine in the afternoon, because this morning, you came out of the chicane and you couldn’t even see turn one!” said Morgan. “When it plays up you’re thinking ‘I’m doing 130mph here and you can’t see anything’.”

Morgan has scored seven consecutive top-10 finishes in a hugely promising run of form for both the 25-year-old and his Independent squad, and currently lies 10th in the overall championship standings.

The maiden BTCC podium for the former Ginetta GT Supercup champion came last season in a frenetic Oulton Park reverse-grid encounter, and the final race at Rockingham is where Morgan feels he can break his win duck with Mercedes.

He said: “I’m hoping we can get the reverse-grid maybe. With it being WIX’s local track as well, they’ve got hundreds of people here so it would be great to get that podium here as well.”

Morgan commented also on the difference between both the Toyota Avensis he drove last season and the Mercedes A-Class of today, saying his current machine is a huge improvement.

He said: “It does feel a lot different, yeah. It’s mint, and we’ve got a lot more mid-corner speed to let the car flow a lot better.

“It’s a great car, and it’s definitely one of the best looking out there!”