Pirtek Racing driver Martin Depper enjoyed a much more competitive outing in the eighth Dunlop MSA British Touring Car Championship meeting at Rockingham last weekend, battling his way to a 12th place finish in the second encounter of the day.

Recovering from a disappointing qualifying on Saturday at the Corby circuit, Depper moved inside the top 20 for a 19th place finish in race one the following day, before claiming a third points finish of the season with a charge on the softer tyres to 12th place in the second.

The race saw Depper maintain his tyres before pouncing on the works Honda Yuasa Racing Civic Tourer of Matt Neal heading into the final chicane during a five-car battle just outside the top 10, the former Mini Challenge champion and Volkswagen Racing Cup race winner setting an ultimate best lap that was over two tenths quicker than both the works Hondas of 2012 champion Gordon Shedden and triple BTCC title winner, Neal.

“I’d meant to do that!” a smiling Depper told The Checkered Flag about bettering the pace of the works Hondas during his race two performance. “There was quite a few things going on out there, but I just tried to sit there in race two and conserve my tyres for the right moment.

“We knew that in the last five or so laps that if everybody had overworked theirs then we would have a bit more grip to play with, and it made a difference. 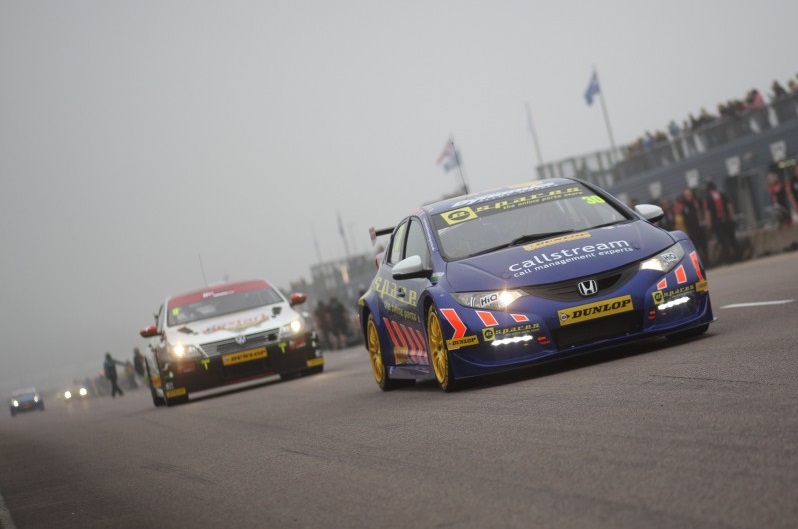 “It did seem to pay off. In that race it was nice, [Matt Neal] didn’t want to give me it easily though!

“We got past him in the end. It’s hard battling with those guys, because they don’t like being beaten do they?”

The 46-year-old found himself briefly again battling with the Civic Tourer of Neal in race three of the day, the latter edging his way by at Tarzan on softer rubber before Depper’s weekend was ruined ultimately by a clash with the United Autosports Toyota Avensis of Glynn Geddie, which sent the Honda skittering off into the scenery at Yentwood.

Depper added: “Matt couldn’t wait to get alongside me in the last race so I gave him a little look to say ‘come on, come on’, but he was on soft tyres. I got a bit of a push from Geddie though and that spoiled my race really. It was a bit unnecessary, because I don’t know what had happened to him. Never mind.”

The Sunday however was one of Depper’s most competitive of the season, made harder than it should have been by a string of bad luck in qualifying following problems with traffic, plus oil left by Ollie Jackson‘s Proton Gen-2 in the 30-minute session that left him 26th on the grid and playing catch-up.

“All in all, a better weekend. Qualifying let us down when we didn’t really get a clear lap in, then a Proton dropped some oil on the track for us on the first set of tyres which scrubbed that session. Then we caught traffic, so I was well cheesed off with that 26th.

“But then, great to move up on Sunday, then to get 12th and I think we could have been 15th or so in race three. I’m enjoying it, but we’re running out of time in the season now!”

The progress of Depper at least moved him up into sixth in the Jack Sears Trophy, now just 26 overtakes behind Alain Menu with six races remaining.

Jack Sears Trophy Standings After Round 8/10: