Reigning champion Turkington and fellow double BTCC champion Plato took to the Hampshire circuit on the latter of the two days in their new environments, the Buntingford-based BMR squad running all four of their Volkswagen CC machines on the Thursday afternoon with team boss Warren Scott and an upbeat Aron Smith also racking up important miles.

A dry Wednesday afternoon of running at Thruxton was not repeated the following day, a Thursday downpour resulting in many teams electing not to venture out on track later in the afternoon to add to their morning laps.

Taking part in both days of action were defending Teams’ champions, West Surrey Racing, with drivers Sam Tordoff, Rob Collard and Andy Priaulx all enjoying a relatively trouble-free return to Thruxton, Priaulx having not driven a BTCC car in anger for over 12 years.

While the multiple World Touring Car Championship title winner ran his IGH-sponsored #111 BMW 1-Series, the returning Collard and new WSR recruit Tordoff both ran plain white liveries, the latter enjoying his first outing in a rear-wheel drive BTCC car having made a winter switch from MG.

“I love Thruxton,” enthused three-time WTCC champion Priaulx. “It’s probably the closest one to home for me, which is always nice! It’s a wonderful track, it’s unique and everything you do here you don’t get to do anywhere else. It’s one of those fantastic fast-commitment circuits, which is very enjoyable as a driver!”

Andrew Jordan racked up healthy miles behind the wheel of the Triple Eight MG6 GT, taking part in all but one session as he returned to a track he always enjoys.

A brimming Jordan said: “It gives me a buzz to drive like nowhere else does – even when I’m on my ‘out’ lap! I know how to get a front wheel-drive car to work round here, and I’d really like to get my fourth consecutive Thruxton pole this year. People have said the MG6 isn’t that great here, but I still think there’s scope to put it on pole. Outside of winning the championship, that is definitely one of my biggest aims.”

Honda also joined the fray on day two with a single Civic Tourer, triple champion Matt Neal driving for the Dynamics outfit on the morning before handing over driving duties to 2012 title winner, Gordon Shedden, as both worked through an engine programme.

The Honda Civic of another returnee, Jeff Smith, ran on both days as did Dextra Racing’s Alex Martin, the BTCC newcomer working alongside multiple race winner Mat Jackson on the second day as he ventured out in his Ford Focus.

Entries from the four of the support championships were present too, with only runners from the Porsche Carrera Cup GB not present due to the championship skipping the May race meeting to compete at Spa-Francorchamps instead. 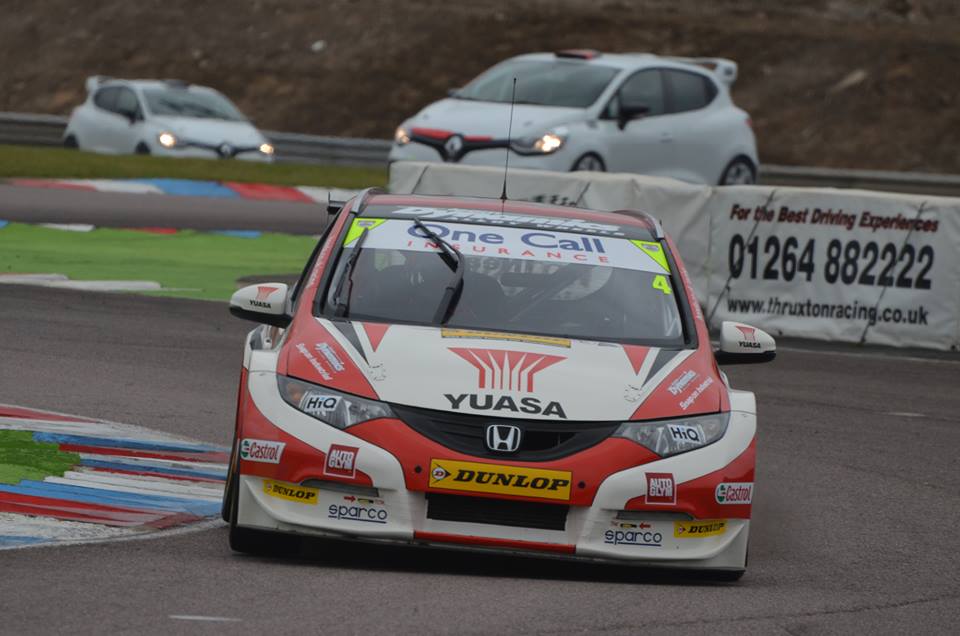