Latest
McLaren’s Norris Hopes Hard Work Will Pay Off As F1 Returns in Austria
Sainz Jr. – “We’ll be more than ready to fight for the best position possible.”
Magnussen not ‘nervous’ about return to racing
Darren Turner Takes Role as BTCC Hybrid Development Driver
Giovinazzi Looks to Improve Upon 2019 Season at the Red Bull Ring
Ticket Sale Suspension Announced for the 24 Hours of Le Mans
Your Complete Guide to FIA Formula 2 in 2020
Andrew Jordan withdraws from 2020 BTCC season
Jimmie Johnson testing Ganassi IndyCar at Indy road course
Räikkönen – “It will feel a bit weird to get back to racing”
BTCC

The Support Our Paras Racing squad fielded two Infiniti Q50 machines for the first time at Donington Park, with Richard Hawken joining at the Leicester circuit after missing the season opener at Brands Hatch.

Unfortunately, an engine problem encountered during race one proved terminal for the Q50 of Palmer, ending his weekend on the spot while Hawken secured three finishes on his debut.

Explaining the problems to The Checkered Flag afterwards, Palmer Jr said: “It’s motorsport and these things happen. We’ll take the rough with the smooth.

“Between qualifying and race one, we changed the car to change the balance. The balance has improved again, but from the very start I was on the radio saying that we were lacking power.

“We couldn’t get sixth gear anywhere – it just wasn’t pulling. It was a bit confusing and we had no warnings on the dashboard. It’s very disappointing not to capitalise, but it’s motorsport. I was happy in qualifying to get into the 1m11s, making that progress forward again, then [Sunday] was the other side of the coin.” 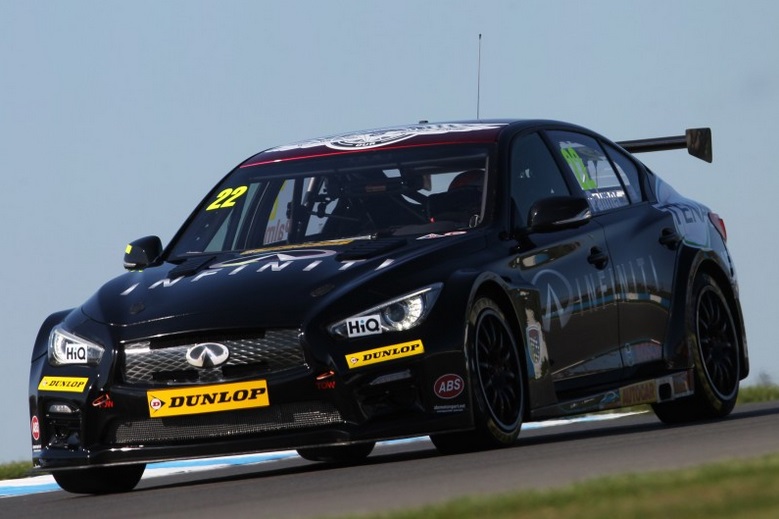 Despite the setback, Palmer Jr said that the team discovered further improvements at Donington Park that have aided the overall balance of the Infiniti chassis, a factor that was predominantly on the mind of the rookie at this early stage of the season.

Singing the team’s praises, he added: “The one thing that we can take from the race is that the corner entry and exit speeds are better, so we should have actually been quicker than we were in qualifying, which is exactly what I was looking for.

“Having heard some of the horror stories that some others teams have gone through, we’re learning as we go and the car has got huge potential. That definitely motivates me.

“The guys have done a super effort to get both cars ready for the weekend. They’ve done us proud, they’ve done the regiment proud and they’ve done Infiniti proud. They put their heart and soul in it.”

The high-speed momentum bends of Thruxton circuit will next grace the BTCC field, Palmer Jr insisting that the car will be back on track for the visit to Hampshire on 9/10 May.

On the circuit’s unique challenges, Palmer Jr adds: “Thruxton is a different track to anywhere we go in the calendar, but I think that we can start moving forward again there.

Moffat and Sutton team up for two-car BTCC assault

Tarran Mackenzie could stand in for Michael Van Der Mark at Donington...