The new manufacturer made its debut in the season-opening meeting at Brands Hatch in the hands of Derek Palmer Jr, who will be joined by Hawken this weekend at Donington Park in a second Infiniti Q50.

Hawken – one of eight BTCC rookies in 2015 – said the maiden outing was a euphoric feeling, in preparation for his qualifying initiation and his BTCC debut on Sunday afternoon.

“When I left the pit lane I had a real rush of excitement”, Hawken told The Checkered Flag after his run in the Q50. “It was quite a euphoric feeling, as though it was a big weight lifted off me.

“The one job now is to get everything set up ready for qualifying.”

Hawken turned his attentions to the progress of the project, praising the efforts of both Infiniti and the Paratroopers that will work on the machines throughout the 2015 season.

“It’s been an enormous project. Six months ago none of this existed; everything has been put together with the help of Derek Palmer Sr, Support Our Paras and of course the help of Infiniti and our sponsors.” 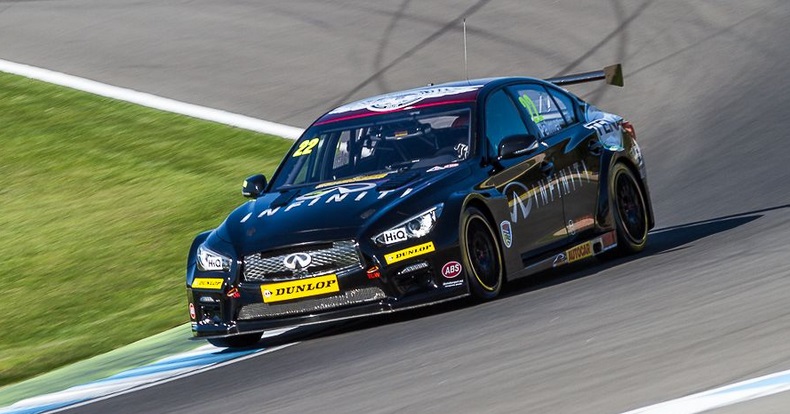 Learning from the experience of his team-mate, Palmer Jr, Hawken added: “One of the things I’ve been working with Derek on has been the start procedure, so it’s been very useful to speak to him about what he learned from Brands Hatch.

“We’re not quite at that stage where we can really share data yet because of the limited running, plus both of us aren’t really pushing hard enough yet to get the accurate data we need.”

The reliability of the Q50 impressed Hawken, who intends to use his maiden weekend in the new machine as a learning experience with the car still in its youth.

Qualifying towards the midfield pack is not what the rookie is focusing on for Saturday afternoon, although the early signs of his maiden run he said gives the team high promise, adding: “I was told I only had nine installation laps, but the pace and reliability especially has been great.

“Let’s not forget that this car is built by some seriously, seriously talented people.

“To take a car fresh from out of the blocks and go out and do as many laps as we did, without any problems, is a testament to the way that the Paras and engineers have built this thing.”

For results, Hawken said his intentions:“Three good finishes. I don’t really want to qualify in the middle of the pack at this stage to be honest, but we’ll work our way to that stage with experience.”