Rob Austin reflected on an eventful start to his 2015 Dunlop MSA British Touring Car Championship season at Brands Hatch, the Audi driver admitting that rear-wheel drive cars suffered more with their tyres at the Kent strip of tarmac.

A weekend of ups and downs for the two-time BTCC race winner saw him forced to fight back from 13th on the grid, netting 14th spot in race one on Sunday before climbing up to 10th in the second encounter of the day.

Despite a saga surrounding the race three grid draw, Austin fought to fifth place in the final 27-lapper having held the lead over eventual winner, Matt Neal, for much of the race.

“It was an eventful day”, Austin admitted when speaking to The Checkered Flag after the action on Sunday, leaving the Indy circuit 12th in the Drivers’ Championship.

“I had a lot of good racing and a few moments that I haven’t appreciated. Overall though, I enjoyed my day.”

Austin was clear on the factor that he felt hindered his weekend. The softer compound tyre appeared to hurt rear-wheel drive machines more at the Kent circuit, lower track temperatures early in the day making it a battle in races one and two.

He added: “Our biggest mistake was choosing the soft tyres in race one. That really hurt us. As you could see, all the rear-wheel drive cars that ran softs struggled because it was just too cold.

“We can’t get the heat in the tyres enough on the warm-up lap, so once the lights go out then you’ve got to get on with it. When you jump on them too much, they just tear apart. Goff in race one ran the softs and he did well because his front-wheel drive meant he can get heat in them, therefore they held on.”

The second race saw Austin steal 10th place from team-mate Hunter Abbott on the last lap which crucially resulted in pole position for race three, albeit escaping contact with Dave Newsham‘s Chevrolet Cruze and a swarm of jostling cars, formed by the struggling West Surrey Racing BMW of Rob Collard which carried 75kg of ballast for winning race one.

Austin added: “In race two, the aim was to get up into the top 10. I could see Collard coming back to us and then the train that I was in was just releasing, so I was being a bit patient not wanting to get involved.

“I was sat behind Hunter and trying to overtake him, but of course the golden rule of motorsport is don’t take out your team-mate. Eventually I lucked in on the last lap, went for a gap on the outside and sailed through on the apex for 10th.”

Austin’s finest hour came in the final race, leading from the start until lap lap 21 when winner Neal and Triple Eight‘s Jack Goff slipped underneath the A4 at Clearways, Austin lamenting the safety car interruption.

“In race three, the safety car killed us. It allowed Matt Neal to rest his tyres and that’s all he needed”, commented Austin.

“I felt I did everything I could though. I nailed the first lap, nailed the restart and then saw him catching me. I was watching and waiting but then he dropped back a bit; I thought for a moment that I had it, but my tyres then started to go off even more than his.”

The chance for a podium finish was ultimately discarded from the equation after contact at the McLaren right-hander late in the race between himself and Andrew Jordan, an incident that sent both wide and the latter to the pits where the MG driver finished 17th.

Austin recovered to fifth and was magnanimous on the incident, saying: “I’ve raced against Andy for a number of years. He’s always been a perfect gentleman to me and I saw how far he was behind me, I covered the inside and we came together. Either way, I know there’s no malice.” 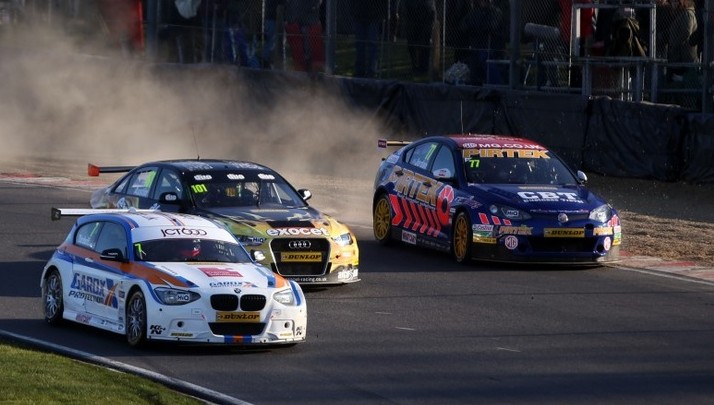 …but tangle with Jordan cost both – Photo: btcc.net