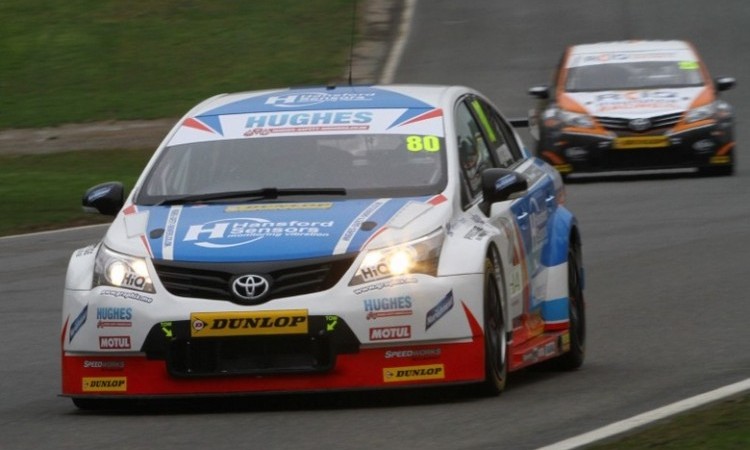 A frenetic first practice session for the 2015 Dunlop MSA British Touring Car Championship at Brands Hatch on Saturday morning was topped by the Speedworks Toyota Avensis of Tom Ingram, tricky conditions mixing up the leaderboard.

A damp surface greeted drivers and all ventured out on wet tyres as precaution in the 40-minute session, times therefore well off lap record pace while several underdogs found the conditions very much to their liking to keep onlookers guessing over the pecking order.

Ingram, confirmed at Speedworks for a second season in BTCC, left his best run late in the Avensis, but clocked a time of 50.665s to beat triple champion Matt Neal in the new Honda Civic Type-R by just over half a second.

Speedworks team boss Christian Dick said: “It’s a very new car so, to start with, that’s magic! We’ve got a good little package and it’s going to take time to get it all gelled together, but it’s a very good start for the boys.”

Neal and Honda Yuasa Racing team-mate Gordon Shedden started slowly, the latter ending 26th and last having not opted to set a respectable lap time in the session.

The returning Andy Priaulx showed the earliest card and ended sixth overall having topped the session after the opening 10 minutes, Aron Smith next up as top BMR Racing Volkswagen ahead of team boss Warren Scott the top 10 rounded out by the impressing Hunter Abbott (Rob Austin Racing) and Simon Belcher (Speedworks).

Jason Plato clocked the fastest time at the halfway stage of the session, almost a second ahead of his BMR team-mate Colin Turkington initially. Reigning champion Turkington had gradually moved up the timesheets to make it a BMR 1-2 with 20 minutes to go, before a flurry of improvements from the field mixed up the order in the final five minutes.

Plato ended down in 11th place ahead of the Mercedes of Adam Morgan, while Turkington was 13th in a session not to be taken literally due to the conditions.

Alex Martin, Mike Bushell and Kieran Gallagher all graced the Kent circuit well under a changeable surface, the trio among eight rookies in 2015 contending the Jack Sears Trophy.

Andrew Jordan meanwhile was only given the luxury of one flying lap in the wet conditions before a turbo problem halted the progress of Triple Eight‘s new man, the 2013 champion finishing 20th while his team-mate Jack Goff finished 23rd in the first practice session of his maiden race weekend in the MG6 GT.

Dan Welch was present but will not compete this weekend in a second Proton Gen-2, damaging his foot in a fall during the run-up to the opening weekend of the new season. The Proton man did however say: “I’ll be back out in the car at Donington.”

FP2 gets underway at 12:45, and you can keep up with the action here at www.thecheckeredflag.co.uk, or via Twitter at @tcfBTCC.