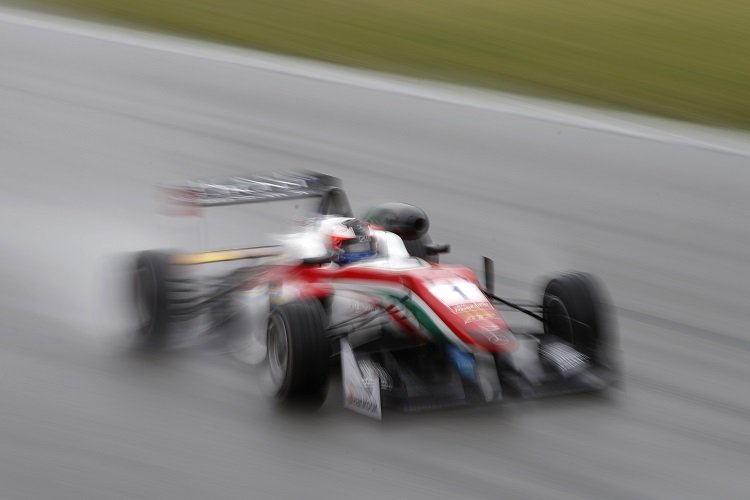 Felix Rosenqvist continued his domination of the Hockenheim weekend of the FIA European Formula 3 Championship as the Prema Powerteam driver took pole position for both races two and three to add to his pole for race one.

The Swedish driver remains unbeaten in qualifying in 2015, and will be the man to beat in the three races that take place over the next three days. His pole positions on Friday were made all the better as they took place on a Hockenheim circuit that was wet and with drizzle falling.

His time of 1m49.630s was enough for him to take pole for race two, which takes place on Saturday, with Charles Leclerc of Van Amersfoort Racing being the top rookie in the field in second, 0.239s adrift of Rosenqvist’s time.

Row two on Saturday will see two more rookie drivers, with Maximilian Günther of Mücke Motorsport alongside the impressive Callum Ilott in the Red Bull-liveried Carlin entry, while championship leader Antonio Giovinazzi will start fifth for Jagonya Ayam with Carlin.

Lance Stroll and Jake Dennis were sixth and seventh fastest for Prema Powerteam, ahead of Alexander Albon of Signature, while the top ten for race two is completed by Team Motopark’s Markus Pommer and Mücke Motorsport’s Santino Ferrucci.

Rosenqvist’s second fastest time during the session of 1m50.396s was enough to see him take pole for race three on Sunday, with Leclerc once again joining him on the front row of the grid.

Günther is again third with Stroll moving up onto the second row ahead of Ilott, while Giovinazzi slips to sixth. Mikkel Jensen will start race three from seventh on the grid for Mücke Motorsport ahead of team-mate Ferrucci, while Pommer starts ninth once more ahead of Jagonya Ayam with Carlin’s Gustavo Menezes.

George Russell’s disappointing weekend continued, with the Carlin driver clashing with Matt Solomon of Double R Racing at the final corner during the session that restricted the Silverstone race winner to two more lowly grid slots. He will start race two from eighteenth and race three from twenty-fifth after qualifying for race one in twentieth.

Christian Horner – ‘an amazing day for the Team’

Racing Point’s Szafnauer: “It was important to bank a couple of good...

Charles Leclerc: “I pushed to go for one stop because I believed...

Tsunoda steals victory after PREMA’s collide for the lead

Charles Leclerc: “We are starting from P8 and I cannot be happy...

Verstappen ‘Felt Strongly’ About Using the Hard Compound for the Race Start...

Nico Hülkenberg: “I’ll give everything I’ve got to make sure we get...