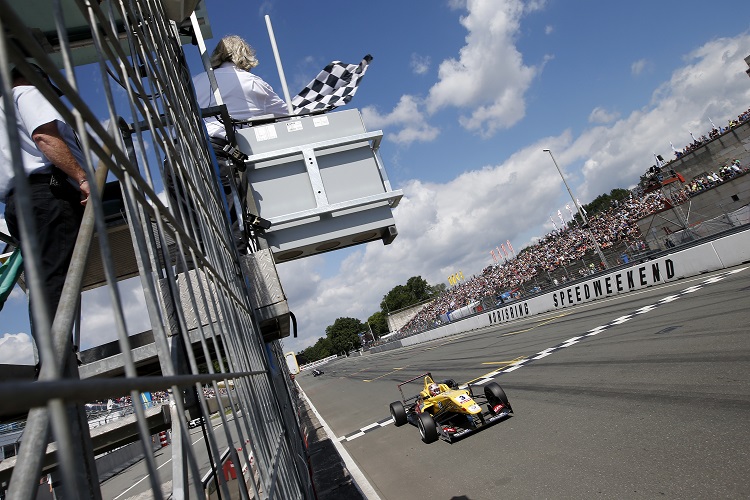 Antonio Giovinazzi made a great start from third on the grid to lead into the first corner, and controlled race three at the Norisring from the front to win for the third time in 2015.

The Italian Jagonya Ayam with Carlin driver had to survive three safety car periods during the race, but was able to win by 1.340s from Carlin driver George Russell.

Pole sitter Alexander Albon completed the podium for Signature, but lost his advantage at the start, dropping down initially to fifth before moving past Jake Dennis and Charles Leclerc to return to the top three, although he was unable to get close enough to Russell ahead of him to move into second.

Leclerc finished fourth for Van Amersfoort Racing, ahead of Mücke Motorsport duo Mikkel Jensen and Santino Ferrucci, who swapped places a few laps from the end of the race, while Callum Ilott took advantage of a battle between the Mücke boys and Dorian Boccolacci to take seventh.

Behind Boccolacci was Alessio Lorandi of Van Amersfoort Racing, while Brandon Maisano completed the top ten as his Prema Powerteam team-mate Dennis fell down the order to miss out on points despite running second on the road at turn one on the opening lap.

Felix Rosenqvist had another disappointing race, with the championship contender failing to score points after making a slow getaway and only being able to finish in thirteenth.

The first safety car was deployed to clear two cars away from the grid, after Matt Solomon appeared to stall his Double R Racing machine only to see Motopark driver Sam MacLeod rear-end his car, eliminating both.

The second safety car was needed when race two winner at the Norisring Maximilian Günther was eliminated by Gustavo Menezes, while the third and final safety car was required to clear up a class between Motopark driver Nabil Jeffri and Fortec Motorsports’ Matt Rao, who was the innocent party in the incident.