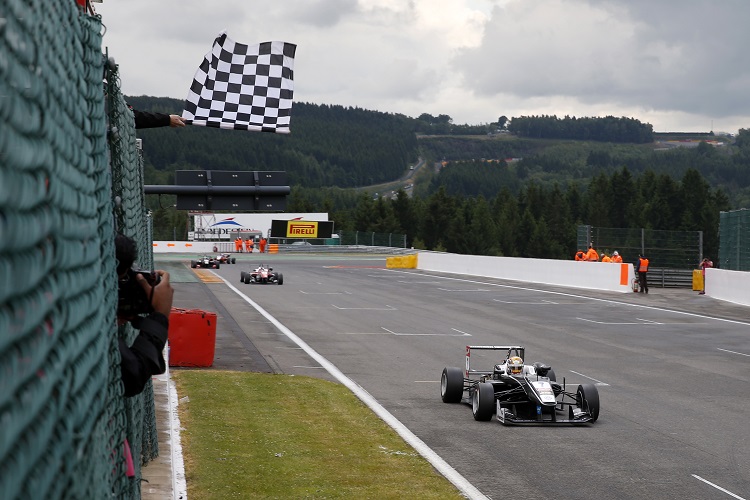 Charles Leclerc took his third victory of his rookie European Formula 3 Championship season after a thrilling battle for the lead at Spa-Francorchamps.

The Van Amersfoort Racing driver took advantage of a late tangle between his championship rivals Felix Rosenqvist and Antonio Giovinazzi to take the lead after the three drivers had fought a near-race-long battle for top spot.

Giovinazzi and pole sitter Rosenqvist both had turns in the lead, with Leclerc also getting involved in the battle, passing and being re-passed by Rosenqvist just after half-distance.

Leclerc eventually won the sixteen-lap race by 1.511s ahead of Rosenqvist after the Prema Powerteam driver was hit by Jagonya Ayam with Carlin’s Giovinazzi at the end of the Kemmel Straight with just a couple of laps to go, with the Italian championship leader retiring from the race due to a puncture.

Alexander Albon drove a strong race for Signature to take third place for his team’s first podium in European Formula 3 since they returned to the series, catching and passing Jake Dennis of Prema Powerteam for fourth and then inheriting third with Giovinazzi’s retirement.

Santino Ferrucci of Mücke Motorsport also passed Dennis to take fourth, with the British Racing Steps Foundation-backed driver being forced to settle for fifth at the chequered flag, just ahead of fellow Briton George Russell of Carlin.

Mikkel Jensen was seventh for Mücke Motorsport ahead of Pietro Fittipaldi of Fortec Motorsports, while Fabian Schiller took his first points of the season in ninth for Team West-Tec F3 ahead of Alessio Lorandi of Van Amersfoort Racing.

After the troubles of Monza three weeks ago with regards to driving standards, it was a much cleaner race in Belgium, with the only penalties seemingly falling to Lance Stroll of Prema Powerteam, who took an early drive-through penalty for making contact with a rival before taking a ten-second stop-go penalty for tagging Tatiana Calderon into spin.