Max Coates was left brimming by his debut Dunlop MSA British Touring Car Championship meeting at Croft last weekend, adding that the Support Our Paras Racing squad have “stability” with their drivers to now improve.

A regular figure within the TOCA paddock over recent seasons, local driver Coates stepped into the BTCC for the first time with the Infiniti squad, having been out of racing for almost exactly a year.

“It was good, but I wasn’t obviously going to try anything silly especially with Derek because there was no need really.”

The weekend was predominantly a learning exercise for the former Ginetta category front-runner in North Yorkshire, Saturday morning’s opening practice session the first time Coates sampled the Infiniti before being thrust into the spotlight of qualifying and race day.

Qualifying just 0.229s off the pace of team-mate and Support Our Paras Racing regular driver, Derek Palmer Jr, a rise of seven places to 21st was Coates’ reward for avoiding an incident involving Stewart Lines in race one, before problems in race two halted his run inside the top 20.

Palmer’s 19th place in race three was backed up by Coates finishing 20th in the same encounter, the latter heralding his opening weekend as a personal success.

“Feels good!” added Coates when quizzed on the handling of the Q50. “The car felt good at the end; I think we can improve it a hell of a long way. It wasn’t a million miles away. 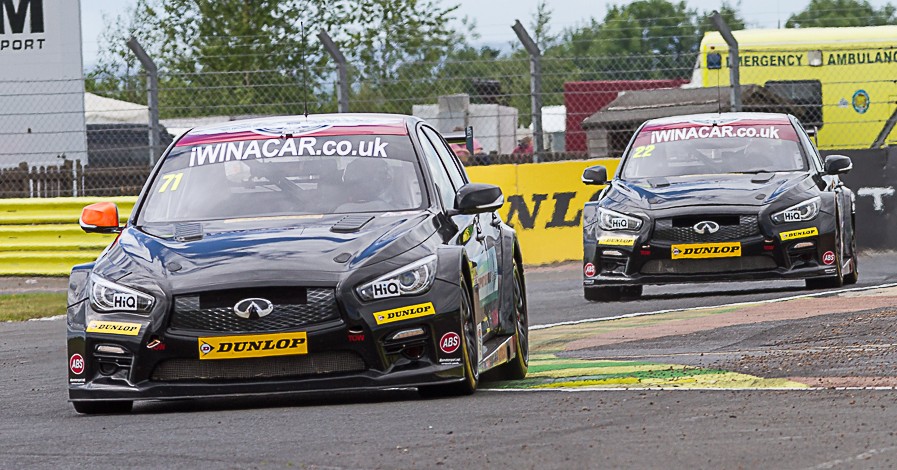 “For us, there is a lot of time we can find with the brakes that we know we want to try at the test. We’ll see how we progress with that, but my car will just go up and up and up.”

The factor that Coates in particular was keen to point out was that he feels his partnership with Zurich-based Palmer Jr can now offer a sense of real stability to the squad, what with the former keeping pace with his team-mate throughout his maiden outing.

“Especially now, from the team’s perspective, we’ve got two drivers that can offer the team stability, then start to go forward together. Me and Derek are currently very similar in speed and I think that will still be case all the way.

“Derek’s been doing a mega job”, praised Coates of his stablemate. “I can’t speak highly enough of him, because I know where the car was and how much it has improved. I can’t imagine how it was for him at the start of the year.”

With the team still hunting for their first points of the season, the Scorton racer enters optimistic that the team can climb the grid at Norfolk’s Snetterton circuit on 8/9 August.

“Obviously, I know [Croft] a lot, but I’m starting to know about the car now. I’m looking forward to Snetterton and I think we can be a little bit further up the grid.”