The 2008 championship runner-up ended the season a credible 12th place in the final standings despite only competing in 15 of the 30 races in 2015, winning four of those including a brace in last weekend’s curtain-closer at Brands Hatch’s full Grand Prix circuit. 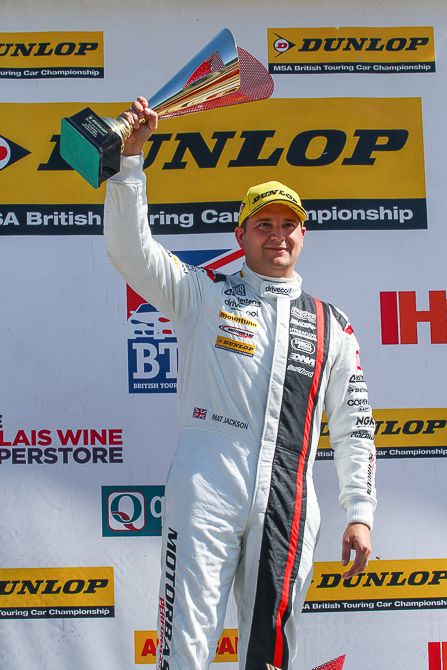 Pole position for the third time in succession went the way of the Ford Focus ST driver at his Motorbase squad’s home venue in Kent, lowering the lap record before dominating the opening encounter on Sunday.

Jackson doubled up despite maximum ballast carried in a more hard-fought penultimate race of the season, before adding a second place finish behind Jason Plato in a frenetic final race as the Ford emerged in front of a fierce dice involving himself, Matt Neal, Adam Morgan and Jack Goff in the latter stages.

Commenting on the action in race three in particular, Jackson told The Checkered Flag: “We got a good start through the first few corners and were right in the middle of the fight.

“It was a fantastic race to be in there with Matt [Neal] and Jack [Goff] who were racing very hard. Really, really good.”

A potential third hat-trick in BTCC history was not fall into the hands of Jackson however, although he was left with only positives from the day’s work.

With eight top-five finishes from his half-season effort, he added: “You’ve just got to think of your own race. Obviously there’s a championship fight there but I’m here to race and Jason [Plato] was the target. We wanted the three wins, but we were just slightly short.

“But hey; great weekend for myself and Motorbase. Pole, two wins and a second – we were just one short of making it a clean sweep, but race three was still a massively fun race to be a part of.

“As usual it’s been a lot of hard work to get this programme back and we’ve come back in style.”