Jack Sears Trophy winner Josh Cook looked back at a “brilliant” maiden Dunlop MSA British Touring Car Championship season, insisting that Power Maxed Racing‘s development gained with RML parts in the final meeting will give them a step up for next year.

A total of 22 wins from 30 in the Jack Sears Trophy for finishing as top rookie were enough to seal the trophy, handed to him by the man bearing its name, Jack Sears.

Besides the rookie honours, Cook flirted consistently around the fringes of the top 10 and inside that bracket also, claiming an overall podium finish with a charging drive at Rockingham to put his Chevrolet Cruze third.

“Although we wrapped up the Jack Sears Trophy a couple of rounds ago, it’s great to actually receive the trophy from Jack Sears himself.

“It also really rounded off the season well with a couple of decent finishes. That last race was a difficult one, especially after the start with the contact, but I really enjoyed that race.”

Cook had previously told TCF that he felt that he did not want to be seen as just another rookie within the grid, joining a Power Maxed Racing squad that entered the season as relative underdogs. 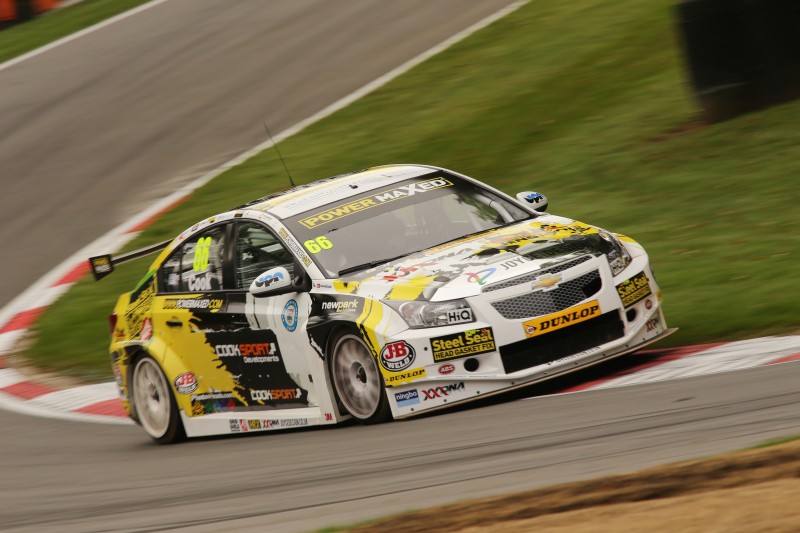 Ultimately, several giant-killing showings on track from Cook and team-mate Dave Newsham defied that tag on numerous occasions, the Chevrolet outfit ending a highly respectable eighth in the Teams’ Championship from 19 squads that took part.

Cook praised the team’s achievements, adding: “I’ve loved being here with the team, with the car and now we’ll see if we can build on that and come back even better for next year.

“It’s gone so fast. I’m actually a little bit gutted that it’s over, but these things have to stop at some point and start again otherwise it would be too much! We’ve get time to recover and have another battle.”

Cook and PMR also aided their own development after debuting parts issued by former leading BTCC team, RML, who recently secured a six-year deal to supply the BTCC’s standard chassis components from the start of 2016 in place of GPRM.

“They have been working well”, said Cook when asked of the Cruze’s performance carrying the latest parts from the new BTCC suppliers.

“Obviously we’ve had to learn a lot and make changes, but that was the whole point to help with the development process. RML have been great and really helpful setting up the car for us, so we have a few little things now that we want to try, such as with the power steering to improve it a bit more.”

By Samuel Gill
1 Mins read
Andy Neate, Tom Ingram and Colin Turkington have all been handed penalties after the opening weekend of BTCC action at Thruxton.
BTCC

By Samuel Gill
4 Mins read
Defending champion Ash Sutton ended the opening weekend of BTCC action at Thruxton with a victory in a lively race three ahead of Jason Plato and Jake Hill.
BTCC

By Samuel Gill
4 Mins read
Josh Cook has claimed back-to-back wins on the opening weekend of the 2021 BTCC season at Thruxton in a one-two for BTC Racing with Dan Cammish.