A podium finish means Andrew Jordan remains just in contention for the 2015 Dunlop MSA British Touring Car Championship title heading the Brands Hatch GP season finale, although he admits that a puncture sustained in race two may have ended his chances for a top-three finish.

A fabulous start to the MG6 GT driver’s weekend in Northampton saw him visit the podium for a fifth time in 2015, converting a second row start into a second place finish behind the day’s first winner, Mat Jackson.

His weekend was then ultimately ruined by an unfortunate late puncture, a problem that befell many drivers during the weekend – Triple Eight having suffered several similar failures on Saturday afternoon also. Jordan limped home 19th much to his disappointment, finishing the day with a 12th place result in the third and final encounter.

“It was a weekend of what could have been; the puncture in race two ruined it for us”, Jordan said after a trying end to his Silverstone weekend. 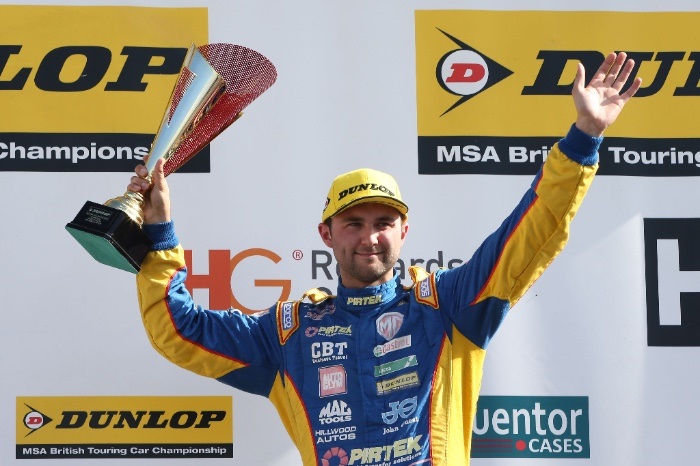 “I’ve been happy with the MG, that is the most I could have achieved and I feel we made another step forward from Rockingham. Two more corners in race two and it would have been a completely different weekend.”

The MG6 GT driver’s blessing came in race one of the weekend, returning to the podium after disposing of championship leader Gordon Shedden early on, before fending off a spirited late effort from the 75kg-laden Honda Civic Type-R .

“We go away from here with some positives, but it could have been better”, Jordan commented.

“It was nice to get back on the podium in the first race; it was all about taking advantage of the soft tyres in the early laps and the moves on Sam and Gordon were pretty well thought out. Race three was one of those races where we made progress and then suddenly hit a wall of traffic.”

Jordan now sits an outsider in the five-way BTCC title battle 64 points adrift with just 67 left on the table. He now admits that a personal target of breaking into the top three in the standings may be a long shot now,ahead of the Brands Hatch GP finale next weekend (10/11 October)

The MG man added: “I had made it my target this weekend to finish the season third in the points but I really don’t think that will be possible now.”