The 2015-16 FIA Formula E Championship is turning out to be another thriller. Despite development in the power trains being allowed for the second season of the series, the racing has been just as close, with four different winners from the first six races, and just one point separating the top two in the championship.

While there have been some star performers this season, others have failed to make the grade, so TCF thought we’d run the rule over how each driver has performed so far this season. Here’s the first part of our half-term report…

This season has seen the best and worst of Sebastien Buemi. A dominant victory at the opener in Beijing had everyone thinking that this season would be a walk in the park for the Swiss driver, but since then errors and mechanical faults have cost him. Buenos Aires typified his season so far – a spin in qualifying sent him to the back of the grid, but then a storming drive through the field saw him almost snatch a victory. Errors like his crash in Long Beach with Robin Frijns mean that despite having the fastest car in the championship, he finds himself in second.

Considering the speed of the Renault e.dams, Prost would have hoped for more at this stage in the season than just the single podium spot he achieved in Mexico. While some of his poor results have been due to mechanical issues, such as his battery overheating in Puturajaya, too often he’s been off the pace of his team-mate. While a couple of decent qualifying performances in Buenos Aires and Mexico show that he can find pace in the car, he needs to find it more often. 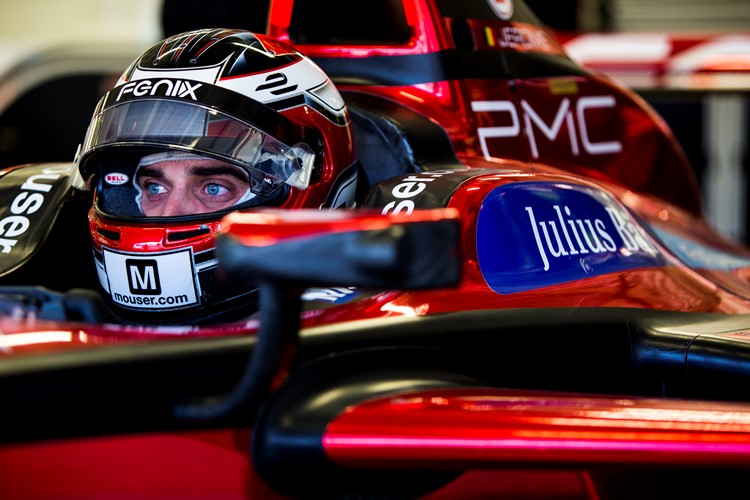 It’s been a solid first half of the season for Duval. Three fourth places show that a trophy is not out of reach for him this season, and he probably should have finished on the podium in Puturajaya before running straight on at turn one and damaging his car in the process. Despite out qualifying his team-mate at the start season, he’s lost out to him more recently, but his consistency in races means he’s not too far behind.

Jerome d’Ambrosio has shown some stunning pace through the course of this season, claiming two pole positions and a fastest lap. While his Dragon Racing car hasn’t always been on the pace, when he has managed to hook it up he’s been magnificent, and were it not for a mistake in Putrajaya he would be right in this title fight. While his win in Mexico only came after Lucas di Grassi’s disqualification, anyone who saw his staunch defending from Sebastian Buemi would be hard pushed to say he didn’t deserve it.

Undoubtedly the star performer so far this season, it’s Lucas di Grassi’s consistency that has impressed most. Never off the podium, the only thing stopping him from having a commanding lead in the championship is the 1.8kg that his Audi Abt team forgot to put on his car in Mexico. The fact that he hasn’t had a pole position so far this year almost makes it more impressive, as he’s achieved these results in clearly inferior machinery. If he keeps it up we could have our second Brazilian Formula E champion.

As much as di Grassi has impressed, Abt has disappointed. He’s still to out qualify his team mate so far this season, and while half of the garage is preparing for a title tilt, he finds himself mired in the midfield. His form is improving, running in the top three before a needless crash in Mexico and then finally getting his first podium of the season in Long Beach, but so far he’s a long way off being a match for his team mate.

It’s been a horrible season for the reigning champion, with just one points finish to his name. A lack of pace and reliability in the NEXTEV TCR in Beijing proved to be a sign of things to come, as he simply hasn’t been given the equipment so far to defend in his title. That being said, he would surely be the first to admit that he hasn’t been at the top of his game either. He’s been out qualified four to two so far by his more inexperienced team-mate, and crashes in Punta del Este and Long Beach have shown that he’s not been at his best.

Similarly hampered by slower machinery, Oliver Turvey has really done all that could be asked of him. He’s out raced and out qualified his team mate, and although he only has one more points finish, his drive from fifteenth to sixth in Beijing showed just how much potential he has. The crash in Puturajaya was caused by a throttle problem, so can hardly be blamed on him, and other than that he’s been solid.